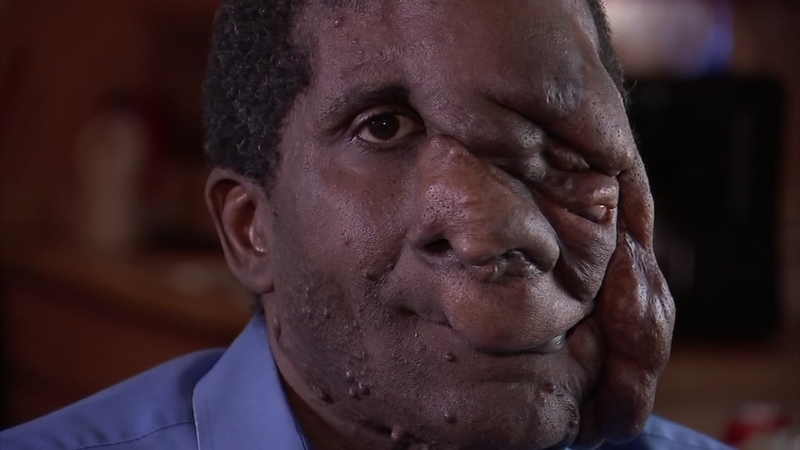 HOUSTON, Texas (KTRK) -- A Houston man's genetic disorder is impossible to hide. It's led to tumors growing all over his body and face.

The condition trapped him in a self-imposed exile for years. The disorder led to years of ridicule. And the cruel comments from people proved constant.

Eyewitness News first introduced you to Reggie Bibbs in December 2017. An Uber driver refused him a ride on account of his looks. The company apologized for the ordeal and later removed the driver from their platform.

RELATED: Man says he was denied an Uber because of his appearance

Bibbs opened up about his extreme case of neurofibromatosis to ABC13's Steve Campion. There is no known cure for NF.

"I hope. I believe there will be a cure in my lifetime," said Bibbs. "There's always hope."

He said at the age of 52, he's finally found self-acceptance.

"The hardest part was in junior high. It was really tough to walk down the hallways," said Bibbs. "I would eat lunch alone because I didn't want to go in the cafeteria. That was a tough part of my life."

He told our reporter he spiraled into a state of isolation. After decades of hiding from the public, he reluctantly accepted an invite to a ball game.

That moment changed his life.

"When I went to the Astros game, it was totally different from what I expected," said Bibbs with his voice shaking. "For 40 years, I hid. I didn't know that people are really there willing to accept me. I didn't give them a chance."

Bibbs recalled a childhood conversation with a guidance counselor. The advisor told him to stay out of the kitchen and not to pursue his true passion.

Bibbs easily remembered the words he heard all those years ago.

It's now a hobby for Bibbs. He shares his creations often on social media.

His mother, Dorothy Bibbs, said his baking is a favorite for family and friends.

"He just started baking. As he baked, all his nieces and nephews loved his cakes," said Dorothy Bibbs. "They always say, 'Uncle Reggie bakes the best cakes.'"

Bibbs said medically the tumors are tricky to remove from his body. Surgery can pose life-threatening risks. There's also a good likelihood the tumors will regrow.

He said because of the risks associated with surgery he won't have any more.

Bibbs now works with the Courageous Faces Foundation. He's spoken with groups across the country.

RELATED: Foundation gives confidence to those living in the shadows

He started a program called "Just Ask." The idea is simple. When it comes to deformities, just approach people in a polite manner, don't judge from a distance.

"I know it's not easy when people see me for the first time," said Bibbs. "If you give me a chance, it will work."

Steve Campion asked Bibbs about the overwhelming nature of neurofibromatosis.

"What do you think your life would be like without this disorder," said Campion.

Bibbs said it's taken almost half a century to find acceptance for himself. He's not about to allow anyone's ignorance to steal it.

"I love who I am," said Bibbs with a passionate voice. "If anybody can't accept me for who I am then they are not worth the time."

His story is a powerful lesson in self-love. It's one we all can learn from.