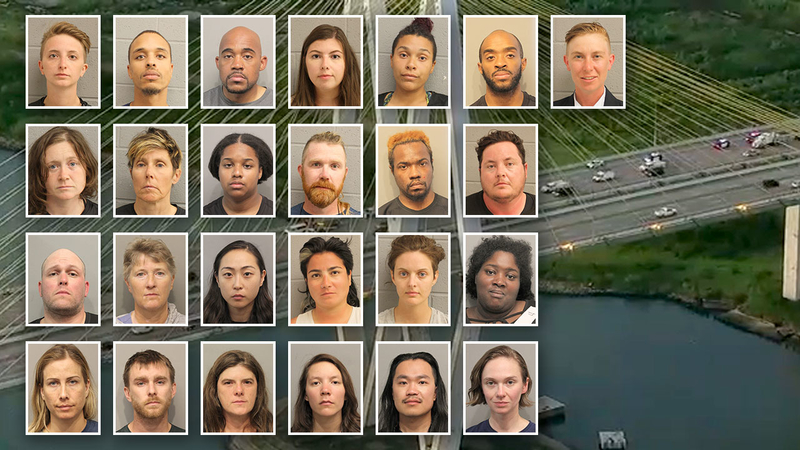 BAYTOWN, Texas (KTRK) -- The Coast Guard has reopened the Houston Ship Channel after an hours-long Greenpeace USA protest that ended with the demonstrators being arrested.

The final protester was lowered to safety from the Fred Hartman Bridge overnight.

Harris County Precinct 8 deputy constables responded to a crash on the bridge around 6:30 a.m. Thursday. When they arrived, they learned about the Greenpeace protest that was unfolding.

The final protester has been safely lowered from the Fred Hartman Bridge. Thank you to our community and all our partners. @houstonpolice @HoustonFire @USCG @BaytownFireDept #hounews pic.twitter.com/DwsLi4Ncs4

In total, 23 protesters were involved by forming a blockade over the Fred Hartman Bridge ahead of the third 2020 Democratic debate, forcing the closure of the Houston Ship Channel and snarling traffic in the area.

HCSO worked with Houston and Baytown fire departments to rappel down and make contact with protesters hanging from the bridge.

Deputies are working with @HoustonFire and @BaytownFireDept to repel down to make contact with protesters hanging from the Hartman Bridge. Goal is to bring them to awaiting boats safely. #hounews pic.twitter.com/kXhDCJFM8B

Eleven people rappelled from the bridge. There were also people acting as "spotters" who were located along the top of the bridge to assist them.

Deputies have begun placing protestors on the Fred Hartman Bridge into custody and placing them under arrest. The operation is ongoing. #hounews pic.twitter.com/vUYxySDB9C

The spotters were also taken into custody.


Their actions were a call to leaders to imagine a world beyond fossil fuels and to embrace a transition to renewable energy, the group's leaders say.

HCTRA is waiving tolls at the Sam Houston Ship Channel bridge (between 225 and I-10) until 8:00 pm to provide passage for drivers in the area affected by the closure of the #FredHartman bridge. #safetravels

Around 4 p.m. Thursday, military personnel arrived at the scene, hoping to bring the blockade to a peaceful end.

It's unknown what specific charges the protesters could face.

If you're viewing on our ABC13 Houston news app, tap to open in a new window.


HISTORY: What the Port of Houston looked like 50 years ago
EMBED More News Videos