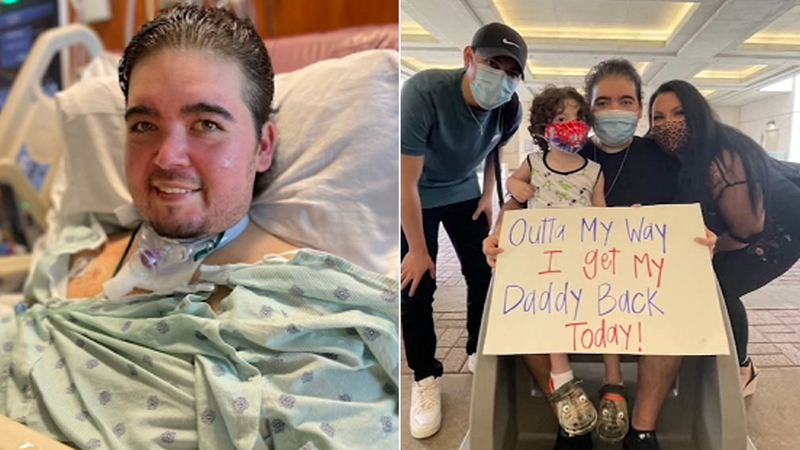 Dad with COVID who missed holidays back home for Father's Day

HOUSTON, Texas (KTRK) -- This Father's Day is extra special for one Houston man.

Allen Herrera spent nearly six months in the hospital due to COVID-19, missing precious time with his family. He even received a double lung transplant, and is now grateful to be back home.

Allen said his wife and two sons are his everything.

So, when he got a life-threatening case of COVID-19, he said his love for them and his determination to make it home is what kept him fighting.

It all started in October. "I just started feeling off. Something didn't feel right," said Allen.

He was having trouble breathing. Then, one day when he was sleeping, his wife noticed something.

Twelve-year-old Cecilia is thriving, eight months after getting a portion of her father's liver. She received the transplant after nearly losing her life to internal bleeding.

He went to the hospital in what would ultimately become a nearly six-month stay. His condition got worse, and he had to be intubated.

"I didn't know what was going to happen. I just told my wife I loved her," said Allen.

That was back in November. In January, things took a turn for the worse.

"His other lung collapsed. I almost lost him," Jessica said. "He literally was fleeting from me."

Things fortunately started to turn around. Allen got better and woke up after being intubated for two months.

He said he couldn't believe how much time had passed.

"I was just shocked and heartbroken because that time of year, there's just so much that goes on," he said. "I missed Thanksgiving being in there. I missed Christmas, me and my wife's wedding anniversary."

But, Allen only used that missed time as motivation in his fight to come home, even impressing his doctor.

"I was struck by his spirit, to be honest. He's a fighter," said Dr. Soma Jyothula of UTHealth-Memorial Hermann.

While his fight was strong, his lungs were badly damaged. So much so that doctors determined he needed a double lung transplant.

He received the transplant in April.

"By God's grace, the surgery went well, and then literally after about two weeks, he went home with no oxygen," said Dr. Jyothula.

While he may have missed a few holidays with his family, Allen will be home for Father's Day.

"It would have been easier for him to give up, but he didn't," said Jessica. "He chose to fight, that means everything to me and the boys to have him back."

"I didn't bring my kids into this world for me not to be in it. And to be able to celebrate Father's Day with them, it's a dream come true," said Allen.