'Be Someone' artist speaks about famous statement 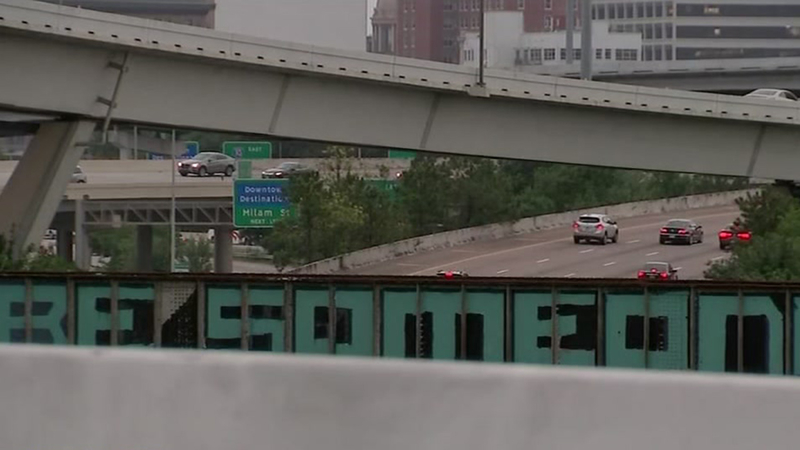 Artist behind "Be Someone" speaks about statement

HOUSTON (KTRK) -- In a city of six million people, it takes something special to make you stop and stare in awe.

"When I see those letters going across the highway, I think of everybody else who is seeing it," said Houston resident Iris Karami.

She's talking about the "Be Someone" graffiti on 1-45.

It's become arguably Houston's most photographed landmark, but the artist can't take credit for it.

"You're worried about people seeing you," he said. "You don't want to get in trouble or anything like that. You definitely just have to watch out."

The artist has never spoken to a news reporter before. He's a criminal - a man who created his most successful work while hanging off a train bridge in the dark of the night.

"When I'm painting I'm zoned out, so if the train passes by, I have my lookout with me. He had to tap me on the shoulder," he said. "I understand. I get it. It's vandalism, but it's in a different sense, too, if you just take those words and apply it to yourself, it might mean something to you."

"I want people to be able to understand that you can do what you want to do if you put yourself to it," he said. "It sounds cliche, but you don't have to get up, you have to go get it, you know?"

"It's like you don't have to be anybody else," said Houston resident Annie Sweeney. "Just be yourself."
Related topics:
societyhoustongraffitiviral
Copyright © 2021 KTRK-TV. All Rights Reserved.
TOP STORIES
Man charged in murder of dad of 7 over 'door ding,' sources say
Man shot by postal worker near Midtown flower shops, HPD says
2 wanted for carjacking family and threatening 10-year-old, HPD says
Father shot by stray bullet while asleep on his couch in SE Houston
Rain chance increases this weekend, fall front expected next week
2 separate freeways closures on US-59 happening this weekend
Man wanted for 9 ATM aggravated robberies in west Houston
Show More
Crews searching for Houston woman missing for nearly 2 weeks
MS-13 leader gets life for murder of 16-year-old witness
Why this Texas Rangers pitcher has some rooting against the Astros
$11 million contract awarded for construction of Abbott's border wall
Supply prices at record high as homeowners repair storm damage
More TOP STORIES News