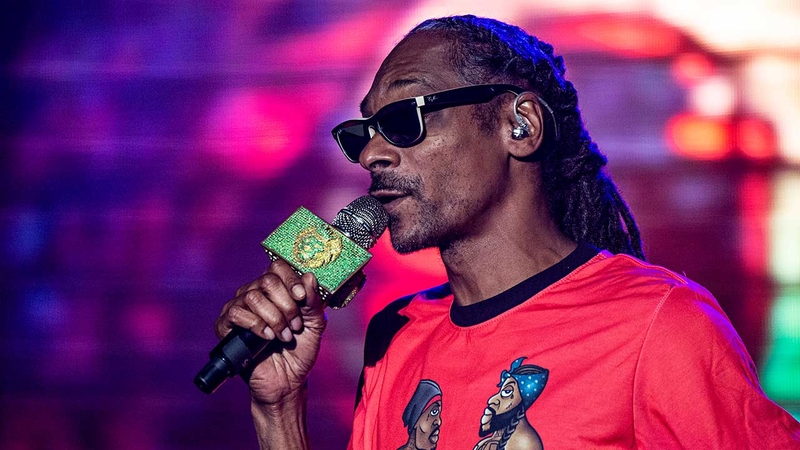 Family and longtime friends gathered for the star's unveiling right in front of the El Capitan Entertainment Center on Hollywood Boulevard, where "Jimmy Kimmel Live!" is taped.

Watch the full ceremony as Snoop Dogg received a star on the Hollywood Walk of Fame on Monday, Nov. 19, 2018.

Kimmel was there to honor the 16-time Grammy-nominated rapper. Dr. Dre and Quincy Jones were also on hand to celebrate.

"Getting a star on the Hollywood Walk of Fame is one of the highest honors an entertainer can receive, and if there's anyone who deserves Hollywood's highest honor, it's Snoop Doggy Dogg. Congratulations, Snoop," Kimmel said.

After thanking Jones, Dr. Dre, Warren G and his extended close family for their support over the years, Snoop didn't forget to thank himself.

He also thanked his supporters who helped him get to where he is today.

"It's a beautiful feeling, man, to start at the bottom and end up here in Hollywood. I used to live on Franklin, man, when I first started on Death Row Records. Now to have a star here, it's a beautiful feeling. I want to thank all the people behind the scenes that made this work, all the people that believed in me. ABC, ya'll know what time it is..."

Hear what @SnoopDogg had to say about getting a #star on the #hollywoodwalkoffame at 4pm on ABC7 pic.twitter.com/oYdOm65PqL

Born Calvin Broadus on Oct. 20, 1971 in Long Beach, he got his stage name from his mother Beverly who joked he looked like the Peanuts character Snoopy.

Snoop Dogg's 16th and most recent studio album, "Snoop Dogg Presents Bible Of Love," was released March 16, debuted at No. 1 on the Billboard charts and stayed there for eight weeks. It was his first foray into the gospel music genre.