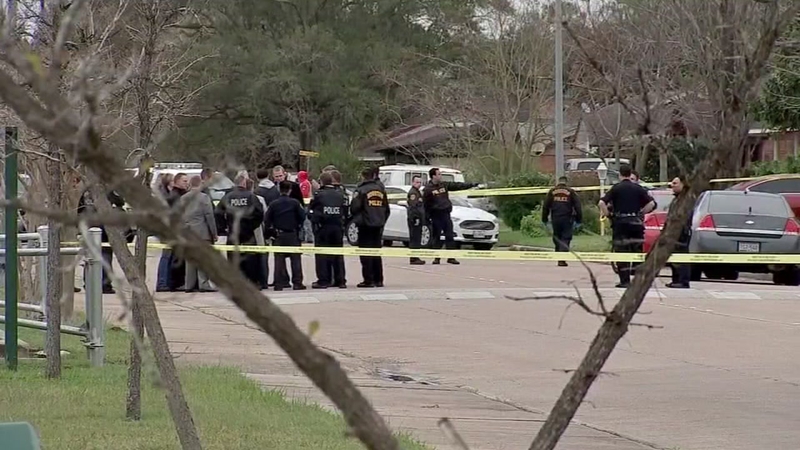 The gunfire exchange happened around 1:15pm in the 3800 block of Hickok on Houston's south side. According to the Houston Police Department, the officer was meeting two men about an online listing he had to sell personal weapons.

"He was going through everything, ensuring that they were of age and that they were going to purchase the weapons in a legitimate fashion is what he was trying to do," Senties said. "Unfortunately, one of the suspects produced a weapon and it turned out to be a robbery."

Senties says the officer, who's assigned to HPD's North Patrol, was in his personal vehicle.

"The suspect approaches him on the passenger side. The officer rolls the window down, there's some words exchanged and at some point, the suspect pulls a weapon out of his pocket, points it into the vehicle, points it directly at him and tells him, 'Give me everything you've got or I'm going to shoot and kill you right here,'" HPD Spokesman Victor Senties said.

The officer put his vehicle in reverse to escape as the suspects tried to open fire. However, the gun jammed.

"The officer then turns off the vehicle, gets out his off-duty weapon takes cover behind his vehicle, and both men decide to start exchanging gunfire," Senties said.

One of the suspects was struck by a bullet. He ran away but sought help at a fire station on Van Fleet. From there, he was transported to Ben Taub General Hospital.

The other suspect fled the scene.

Senties says the incident serves as a warning for everyone.

"Anytime somebody is purchasing anything online, whether it be Craigslist or any of those type of websites, we ask everybody do it in a public place," he said. "It doesn't necessarily have to be a police station. Go to a public place and do an exchange because you can have an unfortunate incident like what happened here today."

The officer has been placed on mandatory three-day administrative duty, which is standard in officer-involved shootings.