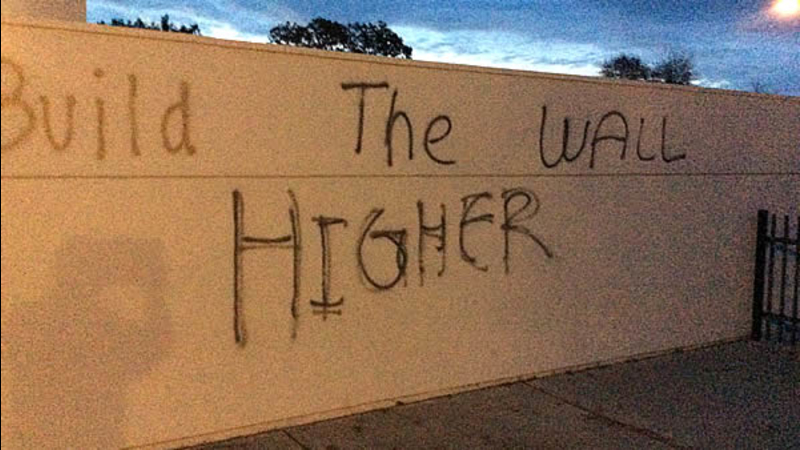 WINSOR, CA -- Over 1,000 students at a Spanish immersion school were exposed to racist graffiti Monday after a vandals allegedly spray-painted hate messages all over the school.

Parents and students pulled up to the drop off zone and found graffiti on the wall with messages such as: "Trump 2016, build the wall higher."

As many can imagine, the messages sent a wave of shock through the campus.

Trump and Trump 2016 messages were spray painted in black, gold and silver on trash cans and doors across the campus.

At least 75 percent of students at Cali Calmecac Language Academy are Latino.

"A mom said 'I saw it and I was so upset by it I went to the bathroom and started to cry.' It's something that strikes a deep emotion. When you do something or say something that threatens a child's feeling of safety, that is not OK," Cali Calmecac Language Academy Principal Jeanne Acuna said.

"I think it's disgusting people would do that," one man said.

Parents swooped in to pick up their children in the rain, anxious to counter the graffiti.

Teachers engaged kids in class. "The text wasn't surprising to them. The violation of writing on our school felt pretty awful," teacher Annette Zucconi-Montez said.

Janitors painted over all of the messages by late morning.

Police are investigating this as a hate crime and looking through surveillance video from the campus.