Salvadoran man to be charged in Nevada killing spree 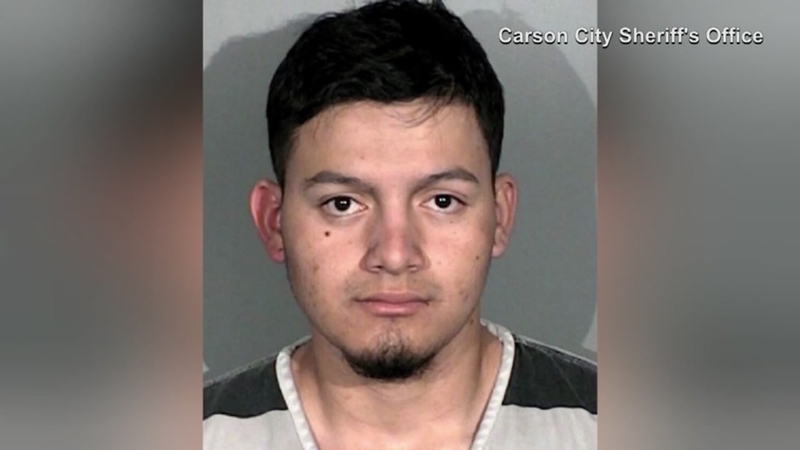 A man suspected of being in the U.S. illegally shot and killed four people in Nevada over the past two weeks, including an elderly couple.

LAS VEGAS, Nevada -- A man suspected of being in the U.S. illegally shot and killed four people in Nevada over the past two weeks, including an elderly Reno couple, authorities said, and the slayings added fuel to the immigration debate.

Wilbur Ernesto Martinez-Guzman, 19, from El Salvador, has been jailed in Carson City since Saturday on possession of stolen property, burglary and immigration charges. Authorities said they expect to file murder charges against him in Reno in the shooting deaths of a Washoe County couple and in Douglas County in the slayings of two women in Gardnerville.

Carson City Sheriff Ken Furlong said federal immigration authorities told his office that Martinez-Guzman was in the country illegally. Immigration and Customs Enforcement did not have details on his entry into the U.S.

The investigation is ongoing, the sheriff said, and it was too early to comment on a possible motive.

Investigators who had been tracking Martinez-Guzman considered him "an imminent threat" when they arrested him Saturday afternoon in the parking lot of a shopping mall.

"We couldn't account for him Friday night, and we couldn't predict what he would do Saturday night," Furlong told The Associated Press. "It was too great a risk to the public not to make the arrest."

Detectives had watched Martinez-Guzman go to a car wash and trash bins, raising concern that he might try to dispose of evidence connected to the slayings. He did not have a weapon when he was handcuffed, the sheriff said.

The suspect did not yet have an attorney who could speak on his behalf, according to the sheriff.

President Donald Trump seized on the killings as evidence of the need for his proposed U.S.-Mexico border wall.

"Four people in Nevada viciously robbed and killed by an illegal immigrant who should not have been in our Country," Trump said Monday in a tweet. "We need a powerful Wall!"

The killings are the latest crimes Trump has cited to bring attention to the wall, which is at the center of his battle with Democrats that has shut down much of the federal government.

Since the start of his presidency, he has highlighted crimes committed by immigrants who were here illegally, including the killing of a 32-year-old woman at a San Francisco pier in 2015. Last month, he tweeted about allegations that a man from Mexico fatally shot a California police officer.

Many academics and Trump's critics have pushed back on the president's narrative, citing studies that have found that immigrants are less likely to commit crimes than people born in the United States.

The Nevada suspect, who was due in court Thursday, had lived in the Carson City area for about a year. His only known infraction was a speeding ticket, the sheriff said.

"We have no information this guy has ever been on anyone's radar," Furlong said.

The investigation began Jan. 10, when 56-year-old Connie Koontz was found dead in her home. Three days later, the body of 74-year-old Sophia Renken was discovered in her home about a mile (1.6 kilometers) from where Koontz lived, authorities said.

On Jan. 16, the bodies of 81-year-old Gerald David and his 80-year-old wife, Sharon, were found in their home on the southern edge of Reno.

The two were remembered as "jovial" by Tom Cates, a longtime friend who knew the Davids through Reno's rodeo and equestrian scene.

Cates said Gerald David used his time as the Reno Rodeo Association president in 2006 to promote a breast cancer awareness campaign by getting the group's cowboys to show they were "tough enough to wear pink shirts."

"You walk into a room and his presence will just command attention. He was a true leader," Cates said.

Sharon David was "exuberant" and "bubbly" and "loved animals to the hills," he said. She was a former director of the rodeo.

Renken belonged to an antique automobile club and was known as the friendly driver of a Ford Model A who was always volunteering to help.

Robin Reedy, who was also in the Carson-Tahoe Region of the Antique Automobile Club of America, said she was surprised to learn Renken's age.

"I would never have known she was 74 by the way she acted," she said.

Koontz, who worked at a Walmart and as a manicurist at a local salon, was remembered by co-workers Tuesday as a positive woman who loved wearing bright colors. Her Walmart colleagues wore memorial buttons with her picture.

She was "the only person I know that could come to work wearing lime green glasses and lime green crocs and rock it," said Teri Bower, who works at the store.

Koontz and her daughter were best friends, Bower said, and the mother had saved up money and surprised her daughter with a trip to Las Vegas for her 21st birthday in December.

Bower said the killings had shaken the quiet community where everyone knows everyone and big news is a pending storm "or a bear running down Main Street."