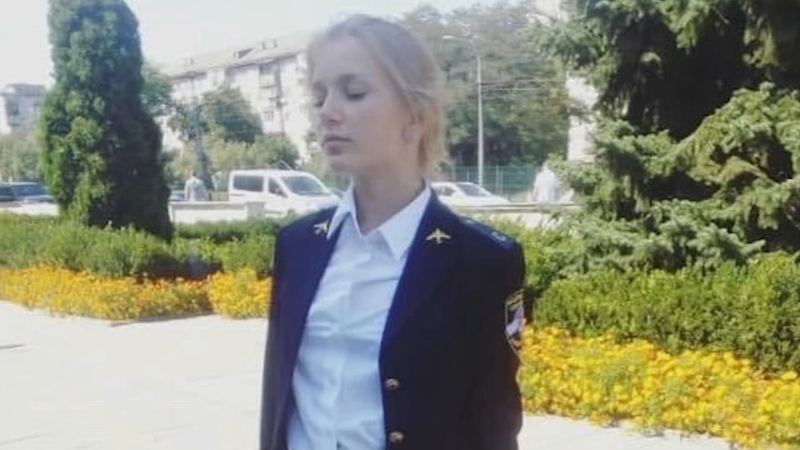 LEAGUE CITY, Texas (KTRK) -- A Ukrainian college student now living in League City continues fighting the war against Russia by raising money through her music and raising awareness through protests.

"Voznesens'k, it's my home city," said Anna Kovalchuk, as she sat at the kitchen table of a family friend who helped her evacuate Ukraine.

The 20-year-old was living in the Ukrainian city of Odessa, where she studied graphic design and worked part-time for an ad agency.

But one morning in late February, Kovalchuk woke up to the sound of explosions as the Russian army was bombing Odessa.

"The biggest problem in your life is not (finding) a good job or not (finishing) university or something like that. And now, you're just thinking will you be alive the next day or no?" she said. "And all of your relatives, you're texting them like it's the last time."

Kovalchuk said she rushed to her small hometown in south-central Ukraine to reunite with her parents, who had devised a plan to get her out of the country. Through tears, she said she spent a final day with her mother and father before she was driven to Poland and then boarded a flight to America using her tourist visa from a previous trip.

ABC13 was with Kovalchuk Tuesday night, as she video chatted with her parents, speaking to us with only the light of their television illuminating the room.

"They say that they cannot turn the light on because it's dangerous, because all our city is in (the) dark right now," she said.

Kovalchuk's parents run a large chicken farm, and she said they felt obligated to stay for the animals and keep feeding her hometown. Of the 50 employees they have, she said only 10 remain, leaving a lot of work to complete.

"They're glad they have a job. They work, they are busy all the time. They know what to do next. It helps them to survive, so they don't think about the war," she said.

Kovalchuk said her two older brothers are now transporting humanitarian aid from Poland, and are determined to stay put with their wives and children.

"They have to stand and protect everyone. It's their mission," she said while translating for her mother.

Her family refused to give their country over to a foreign invader.

"I'm proud of them. At least that they stayed, (they can) protect this area. And for my parents, especially because they keep working," she said.

Though Kovalchuk is safe, she said fleeing the violence has left her with feelings of guilt, so she is making use of her time by raising money through violin performances and keeping her country on top of mind across Houston. She has participated in six protests from Galveston County to Montgomery County.

She says she is focused on a better future.