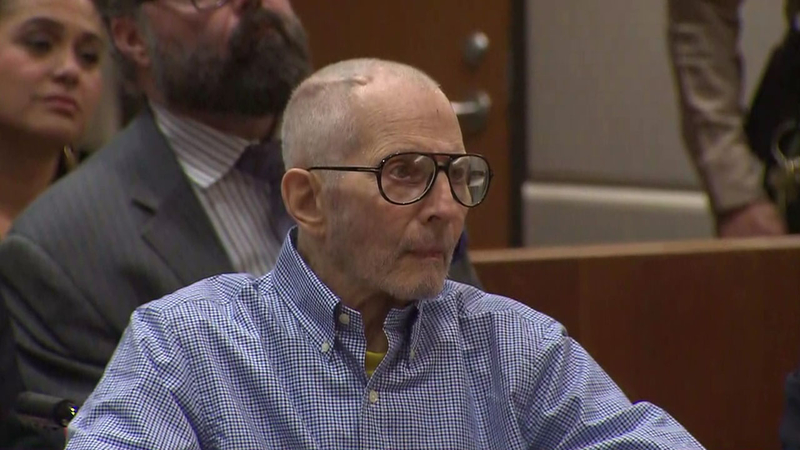 LOS ANGELES, CA -- One of the closest friends of real estate heir Robert Durst implicated him Thursday in the killing of his first wife and provided a motive for the slaying of their mutual friend.

Nathan Chavin testified that he didn't believe Susan Berman when she told him Durst had killed his wife, Kathleen. The body of Kathleen Durst has never been found, but prosecutors contend that the millionaire killed Berman to keep her from talking with police.

"Susan said to me specifically that Bob killed Kathie and I said, 'No, he didn't,'" Chavin said.

Berman told him Durst had said he killed his wife and that they had to protect Durst.

"I couldn't believe he would have committed a crime like that," said Chavin, who is the first witness to say that Durst ever acknowledged killing his wife.

Durst has pleaded not guilty to murder in Berman's 2000 shooting, and he's never been charged with any crime related to his wife's disappearance. But prosecutors said they think he killed Kathleen Durst.

Chavin was giving special advance testimony in case he is unavailable if Durst is ordered to trial.

He testified Wednesday that Kathleen Durst, a longtime friend, told him she was afraid of her husband before she vanished in 1982. Chavin described watching their marriage deteriorate before the disappearance of Kathleen Durst, who went by Kathie.

She had confided in Chavin her worries about her husband but didn't discuss any violence.

"She said she was afraid of him," Chavin said. "She never said he hurt her."

Prosecutors have said Chavin's testimony will "bury" Durst. Before he took the stand, Chavin's identity had been kept a secret, and he entered the courtroom through a back door with a personal security detail.

Prosecutors have suggested that with Durst's estimated $100 million fortune, he could have witnesses knocked off. The defense said that suggestion is absurd and have pointed to Durst's frail condition and the fact he's in jail where his phone conversations are recorded. Durst has pleaded not guilty.

But the judge allowed Chavin to testify in a rare proceeding to record testimony from a few elderly witnesses and those who fear for their safety and may not be alive to testify at a possible trial.

Chavin, 72, said he once considered Durst his best friend.

He told of two violent incidents Durst described to him, including one that involved kicking a man in the head who had flirted with his wife.

"The guy pissed him off," Chavin said and he noted that Durst never showed any regret or distress after being sued.

In another incident, Durst said he had run over a female police officer in the San Francisco Bay Area while creeping through traffic. Chavin asked why he wasn't in jail.