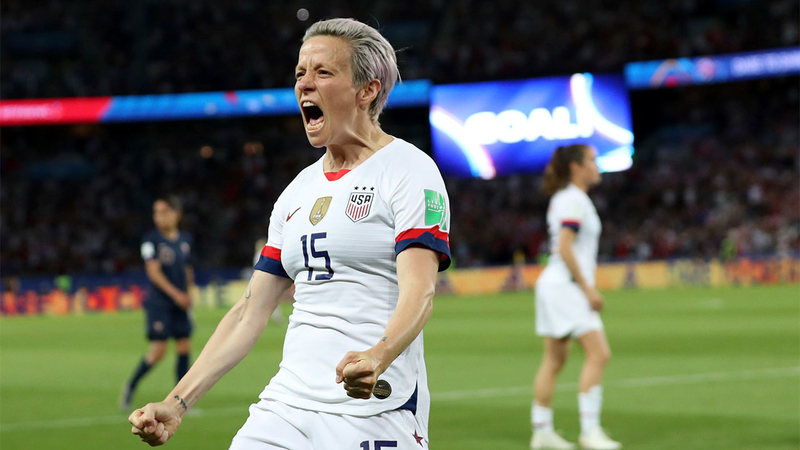 WASHINGTON -- Megan Rapinoe has been vocal about not going to the White House should the United States win the FIFA Women's World Cup, but it looks like she'll still be heading to Washington.

"It may not be the White House, but we'd be happy to welcome [the team]," Ocasio-Cortez tweeted after the U.S. bested France to advance to the semi-finals.

It may not be the White House, but we’d be happy to welcome @mPinoe & the entire #USWMNT for a tour of the House of Representatives anytime they’d like. 🇺🇸 https://t.co/ccgqE8vCds

The invitation came days after Eight by Eight magazine tweeted a clip from a January interview in which Rapinoe said she's "not [expletive] going to the White House" should the U.S. win and expressed doubt that the team would even be invited.

The video was widely circulated and attracted the attention of President Donald Trump, who responded on Twitter with a promise to invite the entire team regardless of how they fare in the world cup.

"I am a big fan of the American Team, and Women's Soccer, but Megan should WIN first before she TALKS! Finish the job!" Trump tweeted.

....in our Country’s history, and the poverty index is also best number EVER), leagues and teams love coming to the White House. I am a big fan of the American Team, and Women’s Soccer, but Megan should WIN first before she TALKS! Finish the job! We haven’t yet....

The president also took a jab at Rapinoe, presumably for her refusal to sing the national anthem before games, tweeting, "Megan should never disrespect our Country, the White House, or our Flag, especially since so much has been done for her & the team. Be proud of the Flag that you wear. The USA is doing GREAT!"

Rapinoe later said that she stood by her comments but not her use of profanity.

"My mom would be very upset about that," she said Thursday in a news conference.

Rapinoe added: "Considering how much time and effort and pride we take in the platform that we have and using it for good and leaving the game in a better place...I don't think that I would want to go, and I would encourage my teammates to think hard about lending that platform or having that co-opted by an administration that does not feel the same way, doesn't fight for the same things that we fight for."
Report a correction or typo
Related topics:
sportsworld cupthe white housesocceralexandria ocasio cortezu.s. & worldpresident donald trump
Copyright © 2022 KTRK-TV. All Rights Reserved.
WORLD CUP
Houston 2026 World Cup Committee hosts youth soccer players
Houston pitches World Cup site with mural visible from the air
7 charged with homicide in death of soccer legend Diego Maradona
Megan Rapinoe wins Ballon d'Or award soccer award
TOP STORIES
NRA day 1 latest: Conference, protests begin; 1 more speaker pulls out
Official says police made 'wrong decision' during TX shooting
Ozone Pollution Watch in effect today
Texas survivor apologized to dad for blood on clothes, losing glasses
Massacre survivor says gunman told them: 'You're all gonna die'
4th grader 'did what she had to to survive' Uvalde shooting, aunt says
'Broken': Mental health availability, funding 'not enough'
Show More
Yankees and Rays share gun violence facts instead of game coverage
Suspected rapist who confessed to murders gets 65 years in prison
Carnival Cruise ship smokestack catches fire in Turks & Caicos
North Padre Island visitors warned of potentially aggressive dolphin
Timeline breaks down Uvalde shooter's movements day of massacre
More TOP STORIES News