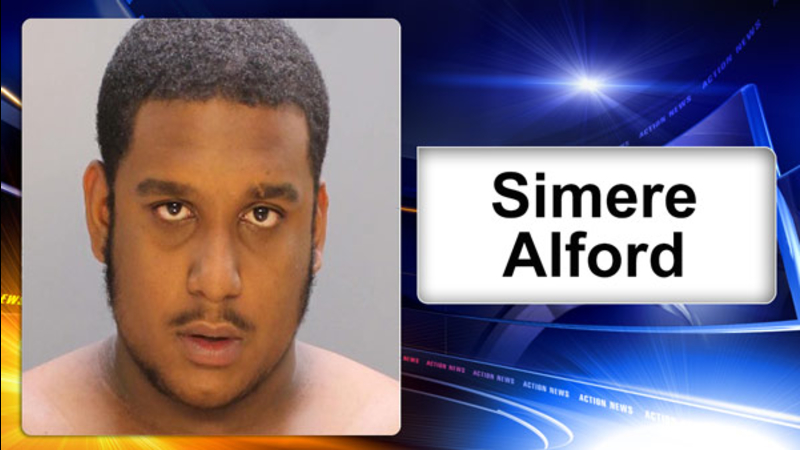 OLNEY -- A teenager is in custody after his younger sister was found unresponsive with a bag over her face in the Olney section of Philadelphia, police say.

Simere Alford, 18, has been charged with attempted murder, aggravated assault, and related offenses. They say it appears he attempted to strangle or suffocate his 7-year-old sister, who remains on life support Wednesday evening.

Alford was arrested after being found in the backseat of a police car at the 35th District headquarters.

Police say he got in the vehicle through an unlocked door. That's where Alford allegedly told police he "did something stupid."

It was around 1 a.m. Wednesday, when police were called to the home on the 5500 block of North American Street.

Alford's mother told arriving officers that her son had taken off with her car. She told police he was high and had been smoking synthetic marijuana.

With police at the home, the woman's 14-year-old son told her that his 7-year-old sister was missing from her bed.

"They began a frantic search of the house. The mother went into the house at that point in time. She found her 7-year-old daughter unconscious on the floor," Philadelphia Police Captain Mark Burgmann said.

Authorities say the woman discovered her daughter with a bag over her face in the basement of the home.

Watch video from the Action Cam in the Olney section of Philadelphia, where a young girl was found injured in her home.

The girl was not breathing. The woman hysterically ran out of the house with her daughter in her arms.

The officers immediately performed CPR on the girl as her mother paced back and forth.

"She was walking, walking around," said neighbor Rayonna Beckett. "She didn't know what to do."

The officer called for backup and continued to perform CPR in the back of a police cruiser as they rushed to Albert Einstein Medical Center.

The girl was admitted to the hospital in extremely critical condition.

She was transferred to St. Christopher's Hospital for Children where she is on life support. Her father tells Action News she is brain dead.

Chief Inspector Scott Small says the vehicle that was reported stolen, that had initially brought police to the home, was recovered a short time later at 3rd and Champlost streets, a few blocks from the home.

Philly Police calling it a strange case. Still looking for 18 y/o. His 7 y/o sister is in the hospital in extremely critical condition @6abc

Police say the vehicle crashed into other cars and the 18-year-old ran off.

Hours later, Alford turned up at the 35th police district.

Neighbors were stunned about what happened.

"She was beautiful, smart, intelligent, active," said neighbor Kathy Gonzales. "She played with all of the little boys and all the kids on the block. She knocked on the doors and said, "Could you come out and play with me?"