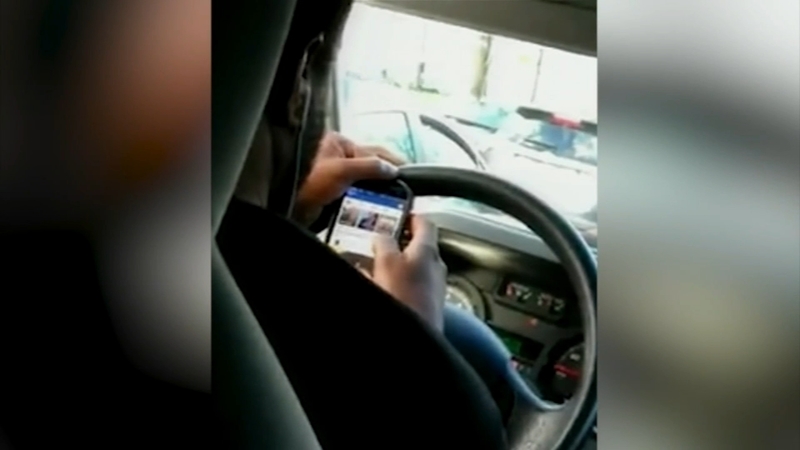 PHILADELPHIA -- People are outraged after a video surfaced showing a paratransit driver looking at his phone while behind the wheel.

Lisa Robinson-Ross was headed to Saint Christopher's Hospital with her son, Qwasair, for his weekly speech therapy session when she noticed the driver of the paratransit van was acting irresponsibly.

She took out her cellphone to record what happened the morning of April 8.

"Why is it so interesting to go on Facebook while you're driving? You're taking a risk and not caring in the situation," said Robinson-Ross.

The driver was watching videos on Facebook while driving, and using his headphones.

"I just think that's unprofessional, a hazard and dangerous," said Robinson-Ross, who is currently seven months pregnant. She called the company to complain but didn't get a response.

When we reached out to LogistiCare Paratransit Company, they explained outside transit companies are contracted to get their clients to and from appointments.

After seeing the video, the company made a change.

They released the following statement:

"We were made aware of the video this afternoon and initiated an investigation. Based on our initial findings, the driver is employed by a contracted transportation provider and he was immediately removed from the program and is no longer permitted to transport any LogistiCare members. We are also conducting a thorough review of the transportation provider's performance record."
Report a correction or typo
Related topics:
pennsylvaniadistracted drivingfacebooku.s. & world
Copyright © 2021 WPVI-TV. All Rights Reserved.
TOP STORIES
3 Harris Co. deputies shot outside N. Houston nightclub identified
20-year-old shot and killed by gunman after minor crash, FBCSO says
Group of nuns enjoyed Astros ALCS Game 1 thanks to Mattress Mack
Cool start to Sunday
Miracle boy's mother marries 6 days after happy reunion
Strike dodged with deal between film and TV crews, studios
Astros fall short to the Red Sox in Game 2 of the ALCS
Show More
Robert Durst hospitalized with COVID-19, his lawyer says
NASA's asteroid hunter Lucy soars into sky with diamonds
5th sailor charged in Houston Navy corpsman's death
Crews use new technology to search for missing TXST student
Houston ICU nurse uses Astros to power through COVID pandemic
More TOP STORIES News