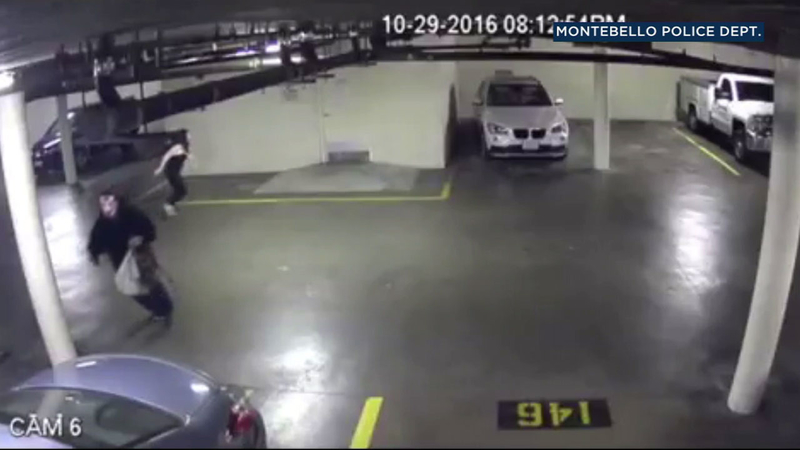 MONTEBELLO, CA -- Surveillance video captures a scary scene as a robbery suspect wearing a clown mask chases a woman through a parking garage in Montebello.

Video from an apartment complex shows the armed suspect targeting his victim and then covering his face in a clown mask.

"What you're looking at is a sick individual who was lying in wait, preying on someone to rob them, and he's wearing a clown mask," Montebello police Sgt. Marc Marty said.

Marty said it appears that the suspect knew what he was doing. He grabbed the woman's arm and pulls out what the victim said was a small folding knife.

The victim and suspect struggle as the suspect tries to grab the woman's book bag. Police said the victim is a student and tried to get her laptop out of the bag.

Authorities said she yelled that she wanted her laptop back. In the video, the suspect runs back to her, but not to give her back her laptop. Instead, he demands her purse and she hands it over.

The suspect then took off again and was caught on another camera walking down the street. Authorities believe he may be living near the complex.

"He used tactics, in my opinion, that are consistent with someone who's done this before," Marty said.

The incident happened on Oct. 29, which was around the time an influx of "creepy clown" sightings happened in the county and across the nation.