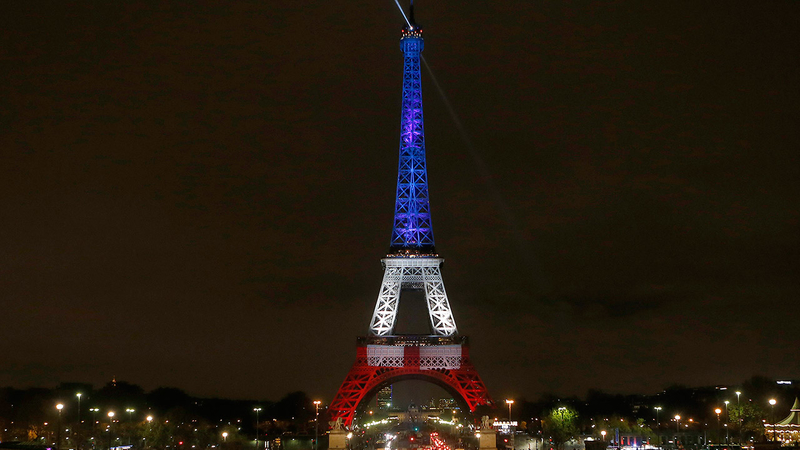 PARIS, FRANCE -- In somber ceremonies, France is remembering the horrors of one year ago, when Islamic extremists attacked bars, restaurants and other symbols of the joyful life that Paris embodies, turning a night on the town into a spasm of violence that shook the nation to its core.

President Francois Hollande was visiting each of the seven attack sites on Sunday to honor the 130 people killed that Friday night and the hundreds injured. Notre Dame Cathedral was holding an evening service.

On Nov. 13, 2015, three teams of attackers put their macabre signatures on the French national stadium, five bars and restaurants in eastern Paris and the Bataclan concert hall. The Islamic State group claimed responsibility for the attacks.

In addition to those killed, nine people remain hospitalized from the attacks and others are paralyzed or otherwise irreparably injured. The government says more than 600 people are still receiving psychological treatment after the attacks.

The remembrances come after a Saturday night concert in which British pop legend Sting reopened the refurbished Bataclan concert hall, performing before an audience that included families of the 90 revelers slain there a year ago by extremists with automatic weapons and explosive belts.

The changed atmosphere was evident outside the Bataclan where hundreds of yards (meters) of barricades, extensive body searches and scores of armed police greeted those lucky enough to get a ticket.

Sting, in a T-shirt with a guitar slung over his shoulder, asked concert-goers in fluent French to observe a minute of silence as he opened the show.

"We've got two important things to do tonight," the singer said. "First, to remember and honor those who lost their lives in the attacks a year ago ... and to celebrate the life and the music of this historic venue. ... We shall not forget them."

He then strummed out a string of hits, including "Fragile" and "Message in a Bottle."

Elodie Suigo, who lost six friends in the attack, said that it was a hard night, even though she loved the music.

"It was difficult going through that door. I don't think I was the only one... We cannot say it was a magical moment because of everything that changed in our lives. But (Sting) is a really great man," she said.

Sting, 65, is no stranger to the Bataclan, playing there decades ago in 1979 as the lead singer of The Police. The singer says proceeds from the concert would go to two charities helping more than 1,700 people officially recognized as victims of the unfolding horror a year ago.

With more than 400 rounds fired within 10 minutes at the restaurants, the coordinated attacks were a wake-up call for France and for Europe. They followed the January 2015 newsroom massacre at the satiric newspaper Charlie Hebdo in Paris and a Kosher grocery store that left 17 dead. But the complex planning behind the Nov. 13 attacks and the high number of deaths revealed a degree of French vulnerability not previously suspected by authorities.

Neighboring Belgium, the starting point of the attacks in Paris, was hit a few months later on March 22 with attacks on its airport and a metro station that killed 32 people.

France declared a state of emergency after the Nov. 13 attacks, which is still in force. Still, that failed to prevent the killing of a police couple in their home last June, the July 14 Bastille Day truck attack in Nice that killed 86 revelers and the slaying of a priest at the altar of his Normandy church in July.