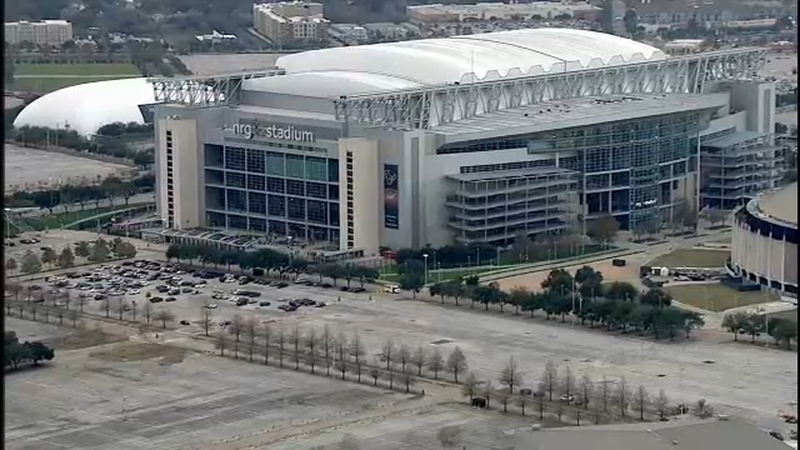 HOUSTON, Texas (KTRK) -- A federally-supported mass vaccination site will be constructed at Houston's NRG Stadium, which will be one of three built in coordination with the state of Texas, the White House COVID-19 Response Team revealed Wednesday.

Under plans by the Biden administration, more than 10,000 shots are expected to be given at the Texas sites, with operation possibly beginning on the week of Feb. 22.

The other sites planned in Texas are at Fair Park in Dallas and AT&T Stadium in Arlington.

With the planned distribution points at NRG and AT&T stadiums, the White House is taking up the NFL on its offer to use the 30 league venues for super sites.

With the NFL season over, President Biden wants to ramp up vaccine distribution across the country, and one way to do, he says, is through the use of NFL stadiums as vaccination sites. In the video, he is given a walk-through at one.

Houston Mayor Sylvester Turner offered his appreciation to President Biden for thinking about Houston in setting up the super site.

"On behalf of all Houstonians, I thank the White House for its plan to establish a COVID-19 mass vaccination site at NRG Park in Houston. Getting the vaccine into the arms of as many people as possible as quickly as possible is vital to ending this pandemic and saving lives.

"We look forward to working with FEMA, the Texas Division of Emergency Management and Harris County to iron out the details, including registration and access. We must work collaboratively to vaccinate as many people as possible and in a targeted way to include a diverse population."

Harris County Judge Lina Hidalgo echoed appreciation for the building of the super site. According to Hidalgo, the county expects NRG Stadium to administer about 5,000 shots a day.

"We're grateful for the Biden administration's aggressive push to increase vaccination capacity across our region, and for taking us up on our offer to use Harris County's NRG Park as a vaccination site. Reaching herd immunity is the keystone to recovering from this pandemic and getting our economy at full force again, but we'll only get there if we work together to make it happen. Efficiency, fairness, and equity are the values we are applying to each step of our process to recover from this crisis and we look forward to working with FEMA and state health officials to ensure this effort reaches those hit hardest by this crisis. Vaccinations at this location are scheduled to begin the week of February 22 and we will share additional details as we get them."

Harris County Judge Lina Hidalgo lauded the Biden White House for brining a federally-supported vaccine site to Houston, but in the video, she suggests some things for the super site.

Texas Gov. Greg Abbott, who tweeted preliminary information on the super sites earlier in the week, said preparations and buildout of the locations are underway. He added registration details for appointments will be announced in the coming days.

Texas is working with FEMA to create some Super Sites for vaccinations.

Initially it would likely be 2 sites with 5000-6000 additional vaccinations per day, 7 days a week for 8 weeks.

It would likely start in Houston & Dallas -- with possible expansion to other locations.

FEMA told ABC13 earlier in the week its aim is to launch a small number of pilot community vaccination centers using primarily federal staff to support state and local governments.

"The goal of establishing these joint federal pilot centers is to continue to expand the rate of vaccinations in an efficient, effective and equitable manner, with an explicit focus on making sure that communities with a high risk of COVID-19 exposure and infection are not left behind," a FEMA official said.

Turner also said this will help the city get even more vaccines in the communities that truly need them.

"This FEMA site will go a long way in addition to utilizing all of the other venues that we currently have," he said. "Then, being put in a position to expand to mobile units and at the same time provide vaccinations to people who are home bound."