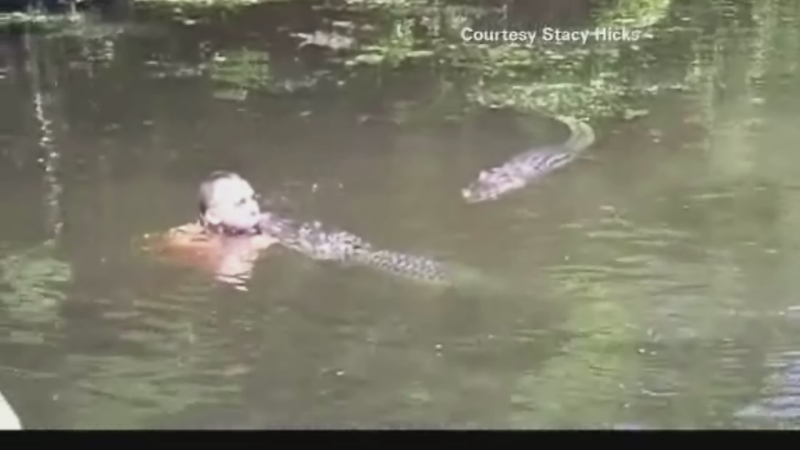 There is no Louisiana law prohibiting luring and feeding of alligators, but it's against local law in Jefferson Parish, where a tourist captured video of an Airboat Adventures tour guide swimming with and feeding two alligators. At one point the video captures the guide putting a marshmallow in his mouth and letting an alligator snatch it away.

"We have now initiated our own investigation into the incident," said Col. John Fortunato, a spokesman for the parish sheriff's office.

He said officers have met with representatives of the swamp tour boat companies in Jefferson Parish and have instructed them to cease any feeding of alligators. Each business was provided a copy of the Jefferson Parish ordinance on this subject, he said.

No charges had been filed as of Thursday.

"Just recently, this information was brought to our attention. Prior to that, we had no formal complaint, nor, were we ever notified of any illegal activity involving the swamp tour boat companies," Fortunato said.

He said his office is working closely with the Louisiana Department of Wildlife and Fisheries in investigating.

The video was shot by Stacy Hicks, a tourist from St. Helens, Oregon, who was visiting south Louisiana last month. In it, gasps can be heard by tourists on the boat as the guide, Lance LaCrosse, jumps in the water to feed chicken and marshmallows to two alligators.

"When he jumped in I was a little scared, more for him than us though," Hicks said. "I am surprised at the attention this video has gotten. I just thought that this was a thing that happens all the time on the tours."

Bo Boehringer, a wildlife and fisheries spokesman, said wildlife agents and parish officials are reviewing the video to determine if there was any wrongdoing.

Louisiana's wild alligator population is estimated to be approaching 2 million. There are also more than 300,000 alligators on alligator farms in Louisiana.