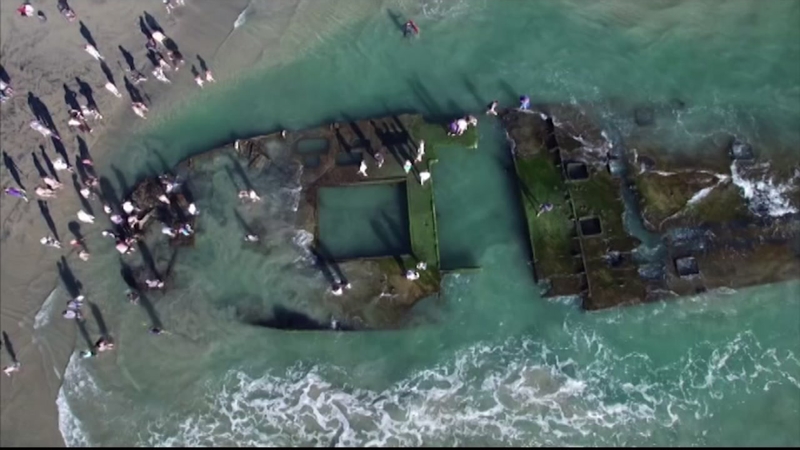 CORONADO, CA (KTRK) -- People in California are taking a step back in time with a walk on the beach. A gambling ship from the 1930s that ran aground has resurfaced due to high tide.

The ship is the 300-feet-long S.S. Monte Carlo, revealed when high tide washed away the sand that had buried the ship. The Monte Carlo ran aground nearly 80 years ago.

Coronado resident Jill Raschke told station XETV, "It's pretty amazing! I've lived here all my life and I've been to this beach many times and I had no idea it was here."

The Monte Carlo in the 1930s was a product of Prohibition. When gambling and prostitution remained illegal, the ship - run by California's mob - became an anchor for the industries. Stationed in international waters, the so-called "sin ships" housed casinos, dance halls and brothels.

Leslie Crawford, of the Coronado Historical Association, said, "The ship was anchored off Long Beach in 1933, but they were still getting a lot of pressure from the police to not have the gambling organization going. So after a couple of years they came down to San Diego in 1936."

Just three miles off the coast of Coronado, the S.S. Monte Carlo set up shop. In 1937, however, a storm set the ship adrift and then ran it aground to the place where it sits today. The city of Coronado took possession of the ship. Too large and too expensive to remove, the ship deteriorated and was eventually covered - until today.
Related topics:
californiaboatsu.s. & world
Copyright © 2021 KTRK-TV. All Rights Reserved.
TOP STORIES
Man shot twice by postal worker returns to shooting scene on foot
Man charged in murder of dad of 7 over 'door ding,' sources say
2 wanted for carjacking family and threatening 10-year-old, HPD says
Father shot by stray bullet while asleep on his couch in SE Houston
Rain chance increases this weekend, fall front expected next week
2 separate freeways closures on US-59 happening this weekend
Man wanted for 9 ATM aggravated robberies in west Houston
Show More
Crews searching for Houston woman missing for nearly 2 weeks
Nonprofit aims to help HISD Latino families advocate for students
MS-13 leader gets life for murder of 16-year-old witness
Why this Texas Rangers pitcher has some rooting against the Astros
$11 million contract awarded for construction of Abbott's border wall
More TOP STORIES News