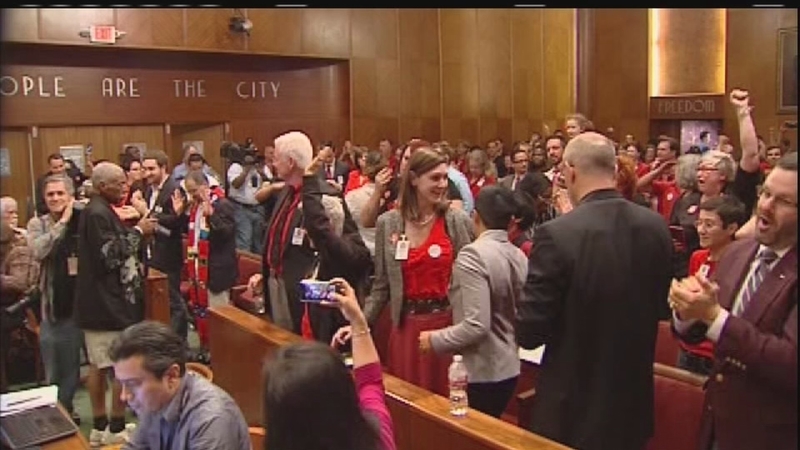 Verdict in HERO a mixed bag

HOUSTON (KTRK) -- Both sides of the controversial Equal Rights Ordinance are claiming victory after a jury's verdict about whether signatures on a petition to put the ordinance to a vote were valid.

There was no clear-cut decision about the more than 30-thousand signatures opponents collected and wheeled into City Hall last July. Jurors were asked six questions about their validity. Their answers were a mix of yes and no.

The jury spent more than a week deliberating whether the city of Houston rightfully invalidated about 25,000 signatures of people who opposed Houston's 2014 Equal Right Ordinance and wanted voters to decide its fate.

The petition needed 17,000 signatures. The city certified only 5,000. So opponents sued the city. Now the judge in the case will examine all signatures and both sides believe that's a win.

"I think it's victory for the voters. I think the voters are clearly going to have an opportunity to vote on this now. Of course, we have a jury verdict of 150 pages. The judge will now apply that to the 55,000 signatures we turned in and determine whether or not we have the requisite 17,269. I think it's very clear that we do," said Jared Woodfill one of the plaintiffs in the case.

"I am very pleased with the jury's verdict, and I expect the court will apply the law to the verdict and issue a final judgment confirming that the petition failed. The City of Houston has had in place for over 100 years the same rules and legal requirements governing the referendum process to ensure fairness and avoid fraud, and the jury's verdict confirms that the petitions did not meet the legal requirements. The plaintiffs are expected to appeal any outcome that is not in their favor. That would be unfortunate for the City. I believe that the majority of Houston wants this divisive fight to be over so that we are able to provide equal rights protections for all of our residents. The City is confident it will prevail."