Inside the life of a gator wrangler RICHMOND, TX (KTRK) -- She's a dental hygienist at her day job. But at night, and whenever duty calls, Christy Kroboth helps relocate massive alligators from areas where people gather.

"I love these animals. I got into it because people are afraid of them, are scared of them," Christy Kroboth said. She is half of the "Texas Gator Squad." They are licensed nuisance gator hunters.

We asked her what she thought when she saw the size of the animal. "Holy Moly!"

Last week the pair caught another massive gator in the First Colony Commons Shopping Center. That one was about 800 pounds. They nicknamed it "Godzilla."

We asked Kroboth, jokingly, whether she is brave or crazy. "A little bit of both," she said.

There's something in her voice that tells you she feels some deep kinship with these not-always-so-gentle giants. "To me he is awesome, super cute. I really seriously want to cuddle up next to him but I know I can't," she says of the gator they helped capture Wednesday at the golf course.

Getting the alligators somewhere they won't be a bother or be bothered, she says, is the next best thing.

Kroboth and Stevens say it's important to respect the potential danger of the gators, but they note that generally if you don't bother them, they won't bother you.

The two gators they are helping relocate this week are headed now to a gator farm near El Campo. 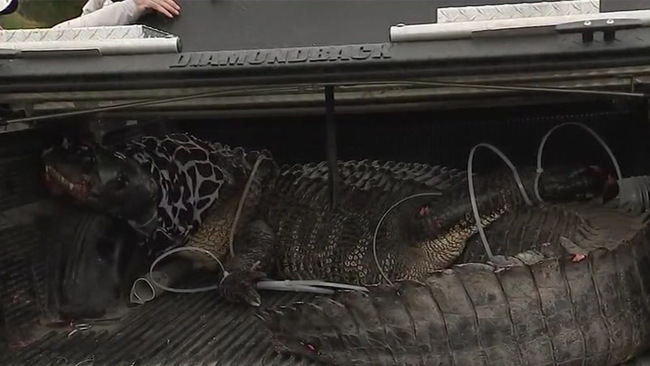