Biden: Allowing Syrian refugees into U.S. the right thing to do 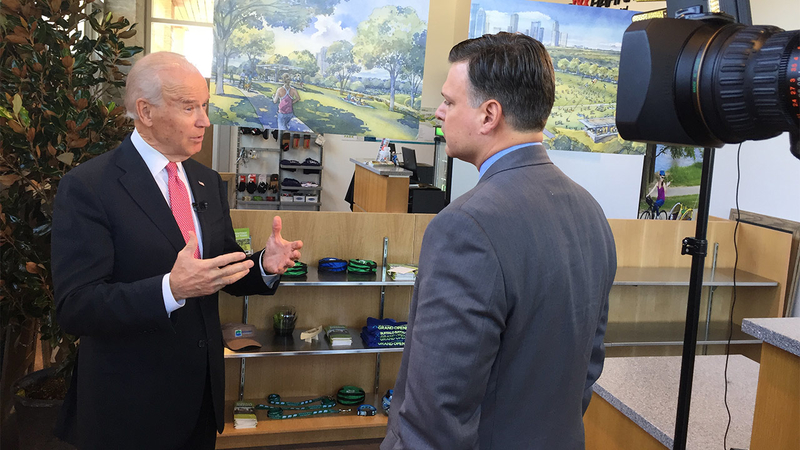 In an exclusive interview with Eyewitness News, Vice President Joe Biden said allowing Syrian refugees into the United States is the right thing to do.

"We believe we should be playing a part in accommodating these mostly women and children who are fleeing chaos," he said after joining Houston Mayor Annise Parker on stage to praise the city's investment in transportation infrastructure. "We're not taking much of a chance at all accommodating, as Germany and other places are doing now, accommodating refugees. "

The Vice President said the more than thirty governors who have told the federal government they don't wanted Syrian refugees settling in their states have no legal standing.

"First of all the governors don't have authority over who can come and who can't come. That's number one. Number two, the vetting system for people coming through the United States is significant. "

As for ISIS' threat to the United States, in the wake of the deadly attacks in Paris on November 13, the Vice President said we must respond with strength and not fear. He said xenophobic rhetoric is unfounded.
"ISIS is not an existential threat to the United States of America," he said. " No matter what ISIS does they can't bring down an American government, they can't fundamentally alter our structure. They can do what they do well. They can try to instill terror by terrorist acts to get us to do the very thing that they hope we'll do. And that is close down our system. "

The Vice President arrived in Houston Tuesday night for a private fundraiser ahead of a lunchtime event with Mayor Annise Parker near downtown. He has bene speaking publicly for months about the need for more investment in the nation's infrastructure, calling it "a national security issue."

He also told Eyewitness News that former President George H.W. Bush visited him at his hotel, a greeting for which he was very thankful.

Houston was the first of three stops in the state. After meeting with Mayor Parker and a small audience at the Wortham Insurance Center on Sabine Street, he traveed to Dallas for a similar event with Mayor Mike Rawlings. He'll end his Lone Star State swing with a private fundraiser in San Antonio.

Biden, the nation's 47th Vice President, contemplated running for his party's presidential nomination in 2016. But he announced last month, he'd decided against it.