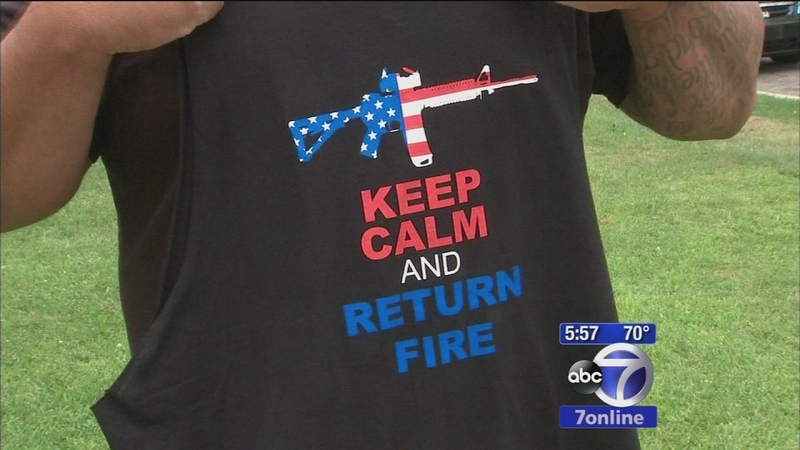 Should man have been allowed to wear T-shirt at amusement park?

JACKSON, NJ -- A marine was denied entrance to a New Jersey amusement park last weekend - all because of his T-shirt.

Mario Alejandro planned a trip to the amusement park with his wife and children, but was turned away at the security gate because of his shirt.

The shirt says, "Keep calm and return fire," and has an image of a red, white and blue M-16. Alejandro is a marine, and was part of the initial invasion of Iraq in 2003.

"When we got through the metal detector, the guy stopped me. You can't come in with that shirt," said Alejandro. "I started laughing. 'You are joking, right?' He said, 'no, that shirt is offensive.'"

Alejandro, a marine who was part of the initial invasion of Iraq in 2003, said the shirt was a Father's Day gift, purchased from a non-profit group that supports the Marines. He said he refused to take it off on principle.

The amusement park would not budge on its policy and although Alejandro's family went in, Mario chose not to.

In a statement, Six Flags said it does not "allow guests to wear t-shirts with images of assault rifles in our parks."

"We apologize for any inconvenience we caused this guest, however we stand by our policy, which does not permit clothing with vulgar, offensive or violent language or images. our goal is to maintain a fun, safe and family-friendly environment," it said.

For Alejandro, the whole incident felt like a slap in the face to all veterans.

"A lot of people gave their blood and sacrifice for the shirt," he said. "They saw the assault rifle and said no, no, no.
Related topics:
jackson townshipn.j. newsnew jerseysix flagsamusement parknew jersey newsu.s. & worldmarines
Copyright © 2021 WABC-TV. All Rights Reserved.
TOP STORIES
Money in Lakewood Church wall may be tied to 2014 theft, HPD says
Fugitive task force searches for parents charged in MI school shooting
Fatal West Loop crash prompts traffic backup at 18th Street exit
Pasadena PD searching for suspect who stole Boy Scout trailer
Family of Navy vet shot to death on N. Fwy searching for answers
Watch 'ShopLocalish: Holiday Deals and Steals' with Tory Johnson
First, it was catalytic converters, but thieves moving to this part
Show More
Record highs possible Saturday, and Sunday will be steamy too
UH could turn national title picture upside-down if it beats Cincy
Mark Cuban buys entire Texas town, but what will he do with it?
How new TX law could impact topics educators can discuss in classroom
Omicron variant discovered in at least 7 US states
More TOP STORIES News