Mr. Potato Head being used by parents of preemie-babies to track growth 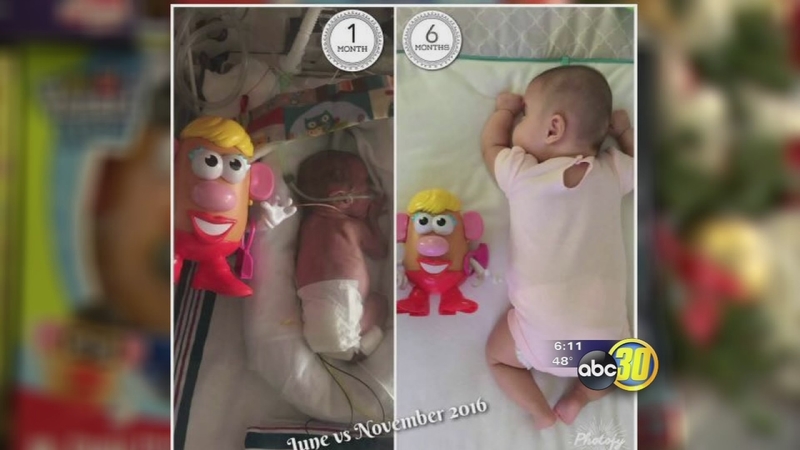 Mr. Potato Head being used at CRMC by parents of preemie-babies to track growth

FRESNO, Calif. -- Ami Alvarez has come far in his short two years. Alvarez returned to Community Regional Medical Center where he spent over three months of his life.

Alvarez was born 15 weeks early and weighed just one pound.

"It was hard for people to put that in perspective by just taking a picture with nothing next to him, so that's why I thought this is really cool to be able to put the Potato head next to him. Everyone know what size that is," said Ashlee Alvarez, Visalia.

Ashlee worked with the Potato Head Project and collected over 200 toys for parents in the NICU. They can take weekly pictures of their premature baby with Mr. Potato head to gauge the child's growth.

Little Mia Rose received the first one-- she weighs just over one pound. Her mom Jackie Muro found it heart-warming people were thinking of her.

"I appreciate it a lot especially for us moms here that we go through a lot. This is something for us, kind of a support for us."

Mr. Potato Head can be sanitized and placed next to a baby.

For parents of preemies every day brings new challenges.

"To families that uncertainty is very difficult to deal with, and to have things to celebrate their accomplishments as the kids get bigger and improve is really, really important," said Dr. Anand Rajani, CRMC Neonatologist.

Little Alvarez now towers over Mr. Potato Head. His parents hope other babies in the NICU someday do the same.