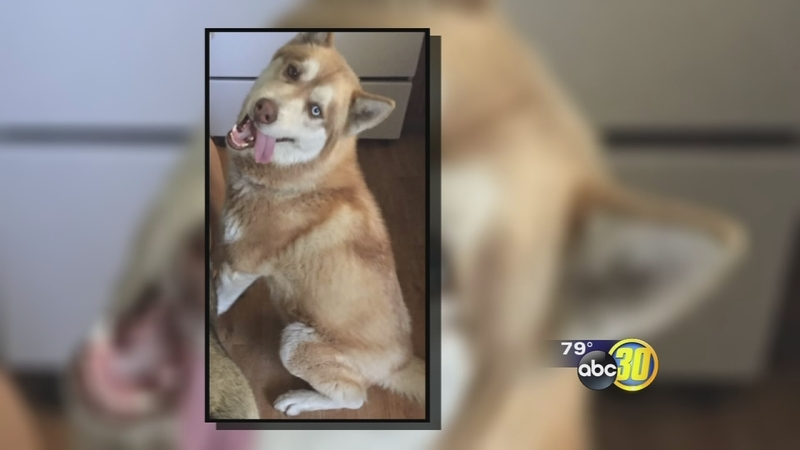 MERCED, CA -- A horrific attack in the North Valley landed two men in custody and left a 1-year-old husky dead.

Both men are accused of viciously attacking a man and his dog. The incident happened in a residential neighborhood in front of several people. The victim and witnesses are too afraid to help police.

Investigators say the dog had to be put down by animal control because its injuries were just too severe after being slashed by two men armed with machetes. The dog's spinal cord, it appears, was severed in the attack.

"The suspects had machetes, this guy backed away," said Merced Police Sgt. Curt Gorman. "According to a witness, they tethered that dog to a nearby fire hydrant on the corner. They began hacking at the dog with the machetes."

Sgt. Gorman was one of several who responded to the gruesome scene. This veteran homicide detective says it was one of the most disturbing of his career. "The animal was suffering, was in pain," he said.

Luscious' owner tells Action News his friend was walking the husky on a leash when police say another dog, belonging to one of the suspects, ran up unleashed and got in Luscious' face.

"As dogs can do there was a little bit of a scrap between the two," Gorman said. "The Siberian husky bit the dog off the leash."

The suspects then got into an argument with the man walking Luscious. The victim eventually walked away from the confrontation, but a while later and several blocks away police say the men, identified as Myron Patillo and Aaron Carney, drove up to the victim and took the dog.

Luscious' owner is extremely angry. "There was blood everywhere. It's just crazy, they basically hunted my dog," Ralph said over the phone.

Police interviewed Patillo and Carney shortly after Luscious was put down by Merced Animal Control. Investigators didn't have enough information initially to arrest the men.

Patillo is in custody and facing robbery and animal cruelty charges. Carney was arrested late Friday night and is facing the same charges.

Because of this horrific incident and other instances of abuse, animal rescuers will be meeting Saturday at 1 p.m. on Olive and G streets in Merced to take a stand against animal abuse.