Man covered in flames after crash dipped into puddle by deputies

GRAPHIC VIDEO WARNING: Video may not be suitable for all audiences.
KTRK
By Tom Abrahams 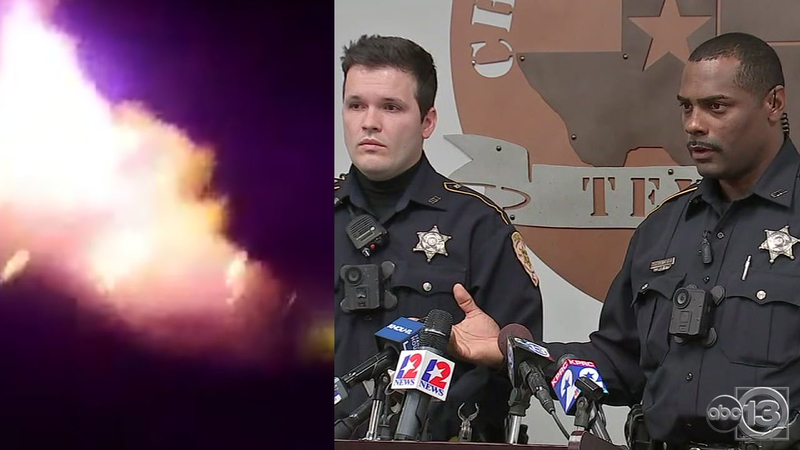 Deputies who ran toward burning car: 'It's our job'

CHAMBERS COUNTY, Texas (KTRK) -- The two deputies who rescued a man from a burning car are telling their story about the night they likely won't ever forget. They say they're not heroes, but the tens of thousands who've seen their actions on video likely think otherwise.

The bodycam footage from Chambers County deputies Braedon Boznango and Carlton Carrington is stunning. It shows their perspectives as they run toward a burning car to pull free a man who otherwise most certainly would have died.

HEROES RESPOND: What they were thinking during rescue
EMBED More News Videos

"I've pulled people from burning cars a thousand times in my mind."

This was Dec. 13 on State Highway 124 south of Winnie at the scene of a violent accident.

Five days later, now that the victim is in stable condition in the hospital, Boznango and Carrington are talking publicly about what we've all now see them do.

"My first thought was we can't let this guy burn to death right in front of us," said Deputy Carrington, a 20-year veteran. '"I just remember watching the flames run up the man's face. There was, I guess, a draft."

Deputy Boznango is just a year on the force.
"I just tuned out all of the ambient noise," he said, "and focused on doing what needed to be done."

The heat was so intense, Boznango's bodycam partially melted. Still, the two dragged the man free of the passenger's seat.

"It's what we do," said Boznango. "It's our job. From the smallest thing to more severe cases like this. "

The sheriff, Brian Hawthorn, told reporters it's more than that. They are heroes, plain and simple. And their actions represent well all men and women in law enforcement.