Farewell to a hero: Funeral held for Luis Alvarez, NYPD detective who fought for 9/11 victims 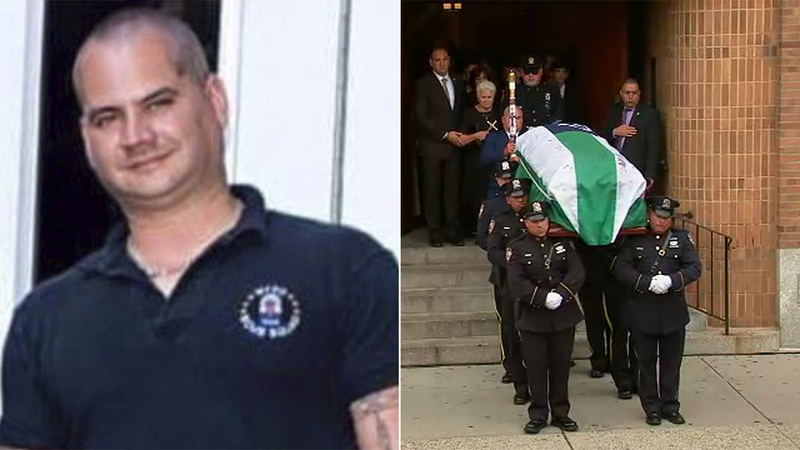 Farewell to a hero: Funeral held for Luis Alvarez, NYPD detective who fought for 9/11 victims

NEW YORK -- Hundreds of mourners gathered in Queens Wednesday to bid a final farewell to a retired NYPD detective who died of cancer related to his work at ground zero and fought in Washington for continued benefits for other 9/11 responders.

Funeral services were held in Astoria for Luis Alvarez, who died days after testifying along with former "Daily Show" host Jon Stewart last month to plead with Congress to extend the Victim Compensation Fund.

Hundreds of NYPD officers saluted the flag-draped casket as it was brought into the Immaculate Conception Church shortly before 10 a.m.
EMBED More News Videos

Luis Alvarez, a former NYPD detective, died days after testifying on behalf of other 9/11 responders.

"These heroes responded to calls for help," Police Commissioner James O'Neill said. "They did not hesitate. That's who they were and still are. He and they viewed their efforts as an obligation that they promised long ago to the people we serve."

Inside, Alvarez was eulogized for his service as a Marine and his time as a police detective in the Bomb Squad. But most notably, he was remembered for his bravery during his final days -- before a House subcommittee, which heard his impassioned plea to re-fund the VCF.

"I did not want to be anywhere else but ground zero when I was there," Alvarez said at the hearing. "Now the 9/11 illnesses have taken many of us, and we are all worried about our children, our spouses and our families and what happens if we are not here."

David Alvarez remembers his father during the funeral mass

Aida Lugo, sister of Luis Alvarez, remembers her brother at his funeral

The bill that provides health benefits to 9/11 responders passed a Congressional committee unanimously, and the measure now heads to the full House. If it becomes law, funding will be available until 2090.

The task seemed astonishingly difficult until Alavarez showed up.

"It was never easy," Rep. Peter King said. "People were resisting us from other parts of the country, somehow thinking this was a giveaway to New York."

Alvarez entered hospice care only days after his appearance, weaker than ever, but his core values resonating then and now.

"Be a good man, finish what you start, never quit on yourself, your word is your bond," Rev. John Harrington said.

Alvarez spent three months working in the rubble down at the World Trade Center site, and his colorectal cancer diagnosis 16 years later was linked to that work. His struggle is now part of a legacy that's more critical than ever.

"We have to remember that we're here to help one another," Astoria resident Maria Martinez said. "And that's the only way we're gonna survive any crisis."

A wake for Alvarez was held Tuesday at Towers Funeral Home in Oceanside on Long Island, where mourners lined up to pay their respects to Alvarez and his large family

"I remember my father the way I will, but I also appreciate the memory that the rest of the country will hold of him," son David Alvarez said.

Relatives explained that the past month was highly unusual because Alvarez was such a private man, but the officer knew he still had a job to do.

Alvarez is survived by his parents, wife, three sons and three siblings.