Old, worn out US flags can now be deposited at Lone Star Flight Museum for proper disposal 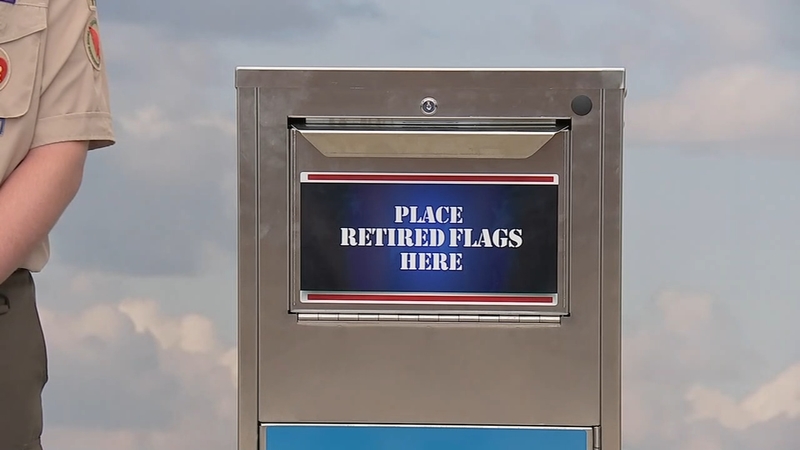 HOUSTON, Texas (KTRK) -- The Lone Star Flight Museum will now serve as a location to deposit old or worn out American flags.

This comes after Jacob Alford, a member of the Boys Scouts of America who attained the highest rank or Eagle Scout in the program, raised money to purchase and design an official American Flag depository, which he donated to the museum.

Many people in the U.S. have flags that are used, torn and no longer fit to display but don't know how to properly dispose of them. Because the American flag is an important symbol for the country, the U.S. Flag Code recommends disposing of old flags in a dignified manner, preferably by burning.

In honor of Flag Day on June 14, which commemorates the anniversary of the adoption of the flag in the U.S. in 1777, the museum planned a flag retirement ceremony on Sunday at 1 p.m. to celebrate the opening of the new flag depository.

Anyone with an old or worn out flag is encouraged to bring it to the museum and place it in the depository during normal museum hours on Tuesday to Saturday, 10 a.m. to 5 p.m. and on Sunday, 12 p.m. to 5 p.m.

Friendswood Scout Troop 442 will periodically collect the flags and conduct safe and appropriate off-site ceremonies to burn the flags.

You don't have to purchase a museum ticket to deposit a flag, but depositing a flag doesn't include entry to the exhibits.
Report a correction or typo
Related topics:
societyhoustonboy scouts of americamuseumsusaamerican flagu.s. & worldboy scoutsflags
Copyright © 2022 KTRK-TV. All Rights Reserved.
TOP STORIES
51-year-old on the run as suspect in corporal's ambush killing
Sergeant was to walk daughter down aisle until his hit-and-run death
Mom shares story of son's 'scary' battle with COVID complications
Drying out but staying cool this week
Texas among states suing Google over claim it's misleading consumers
Man accused of stabbing K-9 in The Heights now charged
'We knew something big exploded': ABC13 recalls moment of Watson blast
Show More
2 adults killed and 12-year-old hurt in crash with speeding tow truck
Dad charged and fired from job after racist tirade posted on TikTok
Bad Bunny announces stadium tour stop at Minute Maid Park
Here are your headliners set to perform for the BBQ Contest at NRG
5 tax changes that can boost your refund this year
More TOP STORIES News