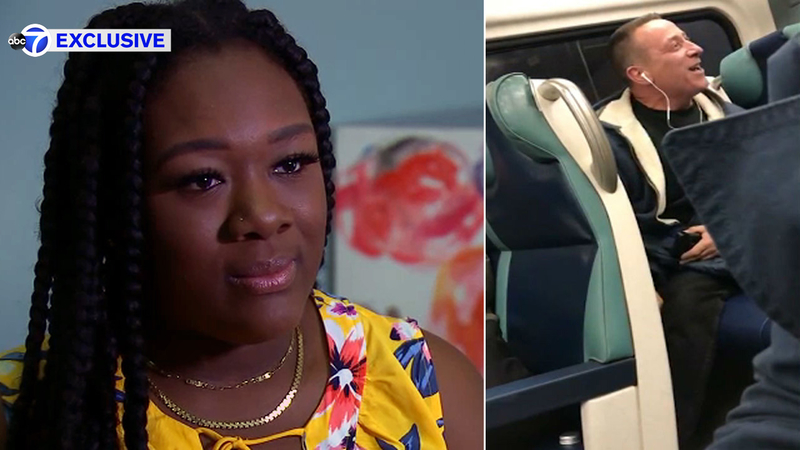 NEW YORK -- A woman who became the target of a racist and sexist rant on the Long Island Rail Road is speaking out about the ordeal, talking exclusively with Eyewitness News.

A cell phone camera captured a man's hate-filled tirade against Soraya Orelien last month on a train from Jamaica to Valley Stream.

Orelien wants the world to see the video of the expletive-ridden barrage unleashed by the man aboard an LIRR train. The language is so vile, so degrading that most of it can't be shown on television.

"He was so angry that you saw the veins pop out of his neck," she said. "He came to my face and was like, 'Ooh ooh ahh ahh, you monkey,' and I just sat there. I just sat there, and I didn't say anything. I just said, 'You need to leave. Leave me alone. Please just walk away.'"

Multiple sources tipped us off to the man's home address, and Soraya Orelein identified him through photographs in news reports. That man screamed at our Eyewitness News cameras from his Long Beach home's front porch.

As soon as Eyewitness News tried to get his side and our camera lights went on, the man rushed inside.

"There's a lot more going on in this world than fake (expletive.) That was not my father. You guys are out of your minds. Fake news. Enough is enough. Fake news," said women who identified themselves as his wife and daughter.

The incident happened around 10 p.m. on April 19 while Orelein was on her phone speaking with a friend, and the incident was recorded by another passenger.

"I just think back to Rosa Parks," she said. "When she was tired, got on the bus and sat in the front, and did not move. That was me. I was tired."

She says the conductor never passed through the car, but other passengers attempted to intervene to no avail. Witnesses said the incident went for about 10 minutes.

The MTA says it is investigating and attempting to identify the passenger.

Officials are investigating after a hate-filled rant on the Long Island Rail Road was caught on camera.