What you need to know about hate crimes in Texas and across the U.S. 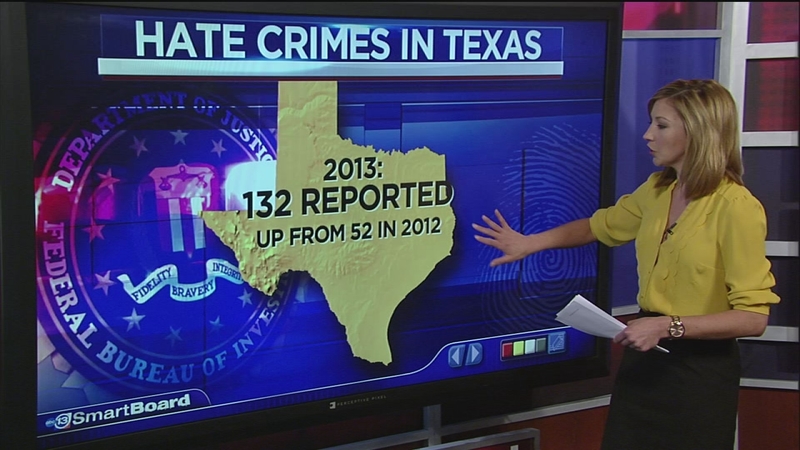 A look hate crime rates in Texas, US

The white man who police said joined a prayer meeting inside a historic South Carolina black church and then fatally shot nine people was captured Thursday. His crime was described as "pure, pure concentrated evil," by the Charleston, S.C. police chief, and the U.S. Department of Justice is investigating the killings as a hate crime.

The Justice Department probing into a hate crimes is not new. Its agents have investigated and tracked crimes triggered by "prejudice based on race, religion, sexual orientation, or ethnicity" since 1990.

Most of these hate crimes were not fatal.

While the majority of hate crimes deal with race, that is not the only factor the FBI uses in tracking hate crimes. Religion, gender identity and sexual orientation are also categories.


Of those of all hate crimes tracked by the FBI, 3.5 percent occurred in churches, synagogues, temples or mosques.

Recent successes in prosecuting hate crimes identified by the FBI include:

In Texas in 2013 -- the most recent numbers available --there were 132 hate crimes, according to the FBI.

In the city of Houston and in Harris County, there were 16 incidents designated as hate crimes in 2013, according to the FBI.

The most prominent hate crime case that year surrounded the arrest of Conrad Barrnett.

Barrett, who is white, was charged with a federal hate crime for allegedly assaulting a 79-year-old African-American man in a knockout game-style attack, prosecutors said. Barrett, from Katy, recorded himself on his cell phone attacking the man and showed the video to others, officials said.

He has argued he suffers from psychological problems and his case is ongoing.

Not all hate crimes that are reported initially as hate crimes remain in that category after police investigate. Earlier this year, a fire was set at a southeast Houston mosque, and many initially wondered if this was a hate crime attack. Police said it turned out to be a homeless man who said it was an accident. He was charged with first-degree arson.