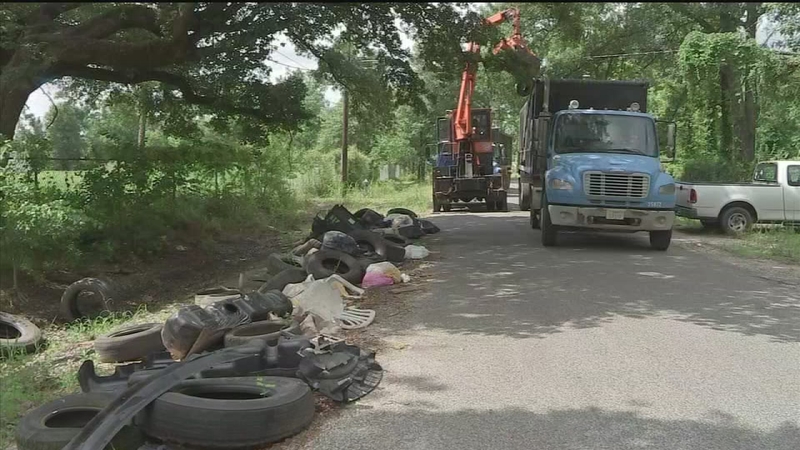 Illegal dump in NE Houston cleaned up after ABC-13 report

HOUSTON (KTRK) -- Two days after ABC-13 put a spotlight on a stretch of road in northeast Houston that had become a massive dump of tires, mattresses, animal carcasses and even discarded car gas tanks and roofing shingles, city workers were on the scene, cleaning up the mess.

"This is material that was dropped off by a small-time contractor," said Gary Readore with the Houston Solid Waste Management Department, as he walked through the piles of offal and junk.

Landfills charge a tipping fee and haulers who work on the fringes of the law will sometimes cross that legal line and dump their garbage in isolated parts of Houston to avoid paying that fee, Readore said.

"They were more than likely paid to do a job," he said. "The responsible thing would be to take it to a landfill and dispose of it, they decided not to do that, probably pocketing the money."

The illegal dumps "become a problem for the homeowners who live around here," Readore said.

Local homeowners who alerted ABC-13 to the makeshift dumping ground along a largely isolated Green River Drive said they are happy to see the city workers in action.

"It's progressively gotten worse over the past two, three, four years," said Reva Fields. She and her husband live nearby and walk daily along Green River Drive, holding their noses along the garbage-strewn street. "It's was bad. Really bad, with all the tires stacked up around here. Probably 75 tires."

Discarded tires are a particular problem this time of year, according to Readore. As they fill with water, tires become a perfect incubator to breed mosquitos.

"It's not just a dumping problem, it's a public health issue too," he said.

And it's a bigger problem than just Green River Drive.

And while records for the past month show there are 945 reports citywide of nuisance properties with dumped tires and more awaiting cleanup citywide, there are countless other dumpsites in the region and beyond.

City officials declined to even provide a ballpark estimate of how many illegal dumps might be located through the region.

"Tires are a problem not just here in Houston but throughout the state of Texas, especially in the Valley, down south," Readore said. "It's a chronic problem."

And even when officials locate a dump and clean it, it often soon becomes a dump again.

"We can come out to a site like this, pick the stuff up, and in two weeks, people are out dumping again," Readore said.

Resources are limited, Readore said, but the city works closely with county officials and the Houston Police Department to try to identify illegal dumpers. Security cameras also go up in persistent dumping sites, according to officials.

"The more people we can catch and HPD can prosecute, the word starts to spread, and I think we'll see a lot of this reducing," he said.

"I hope that somewhere down the line we can have cameras down here, so we don't have to do this again," she said.

In the meantime officials ask residents to call 311 when they spot an illegal dump.

Here are some other key numbers to report illegal dumping:

Another organization to contact? Try ABC-13. It worked for Reva Fields.