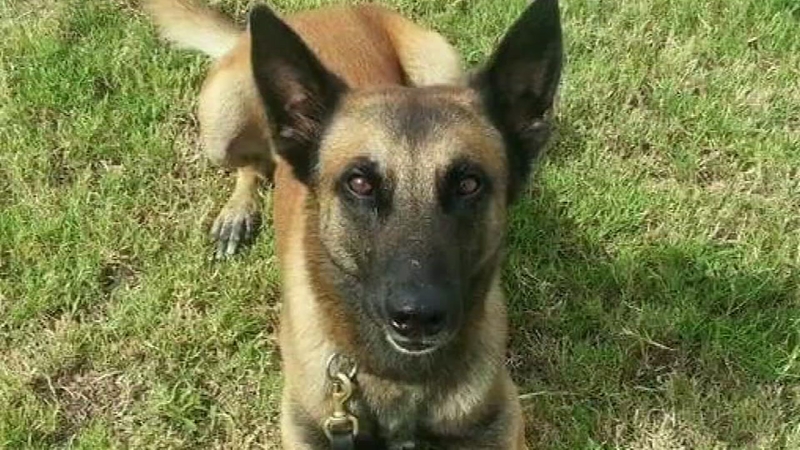 HOUSTON, Texas (KTRK) -- The Houston Police Department is mourning the loss of one of its K9 officers.
EMBED More News Videos

ABC13's Marla Carter reflects on the service Rony provided for Houston during his years on the job.

Officer Rony was injured overnight while going after a suspect.

Houston Police Chief Art Acevedo told ABC13 it all started when officers tried to pull over a stolen car around 1 a.m.

That led to a chase where police say the suspect threw what police think was a gun or drugs out of the window.

We're also told that the suspect rammed an officer's car during the chase, which ended in the 12700 block of River Trail in northeast Houston.


Rony spotted the suspect and went after him in a heavily wooded area.

Chief Acevedo said that's when Rony seriously injured his leg after he got stuck on a log or some other type of wooden object.
EMBED More News Videos

Veterinarian discusses why Rony needed to be put to sleep.

"Essentially, what happened was, his elbow shattered so there were breaks in multiple different places," said veterinarian Dr. Laura Ron with Vergi Animal Emergency Hospital.

Rony was such a fighter, despite having multiple breaks in his leg, he attempted to continue working.

"These are dogs that live to chase. What the handler was actually saying was, even though his right arm wasn't even working, he was still trying to get himself back up to try to go chase the suspect again," said Dr. Ron.

Dr. Ron said prior to this injury, Rony had, had previous injuries and bad arthritis in his other three legs. He's a fighter but the officers and vet agreed, amputating his leg wouldn't be fair to Rony.

"Amputating his leg would not be fair because that puts a lot more weight on his remaining legs that would make them fail and they're already on a lot of medications so even though it was the most horrendous of options, it was the most fair for the dog," said Dr. Ron.

"As you can imagine the handler is very attached to this dog. It was tough to watch him say goodbye to his canine partner but the dog went out the way, as he said, the way he'd want to go out, which is capturing a suspect," said Houston Police Chief Art Acevedo.

The department plans to honor Rony early next week.

K-9 Rony sadly lost his life after he was injured in the line of duty this morning. He broke his leg while chasing a suspect. The vet said based on past injuries and the difficulty to heal from this, the choice was made to put him to rest @abc13houston pic.twitter.com/IrxTbH4HwG

The chase suspect was taken into custody.

Rony was a Belgian Malinois.


He had been with the Houston Police Department seven years and made 250 captures.

Rest easy Rony, you will be greatly missed. pic.twitter.com/vcYtI0RVxJ

His handler said Rony went out the way he would have wanted to -- capturing a suspect in the line of duty.

As news of Rony's death spread, other law enforcement agencies shared their condolences with the HPD on social media.

We’re sorry to hear of the loss of this K9 Officer @houstonpolice https://t.co/klSy9AyrkJ