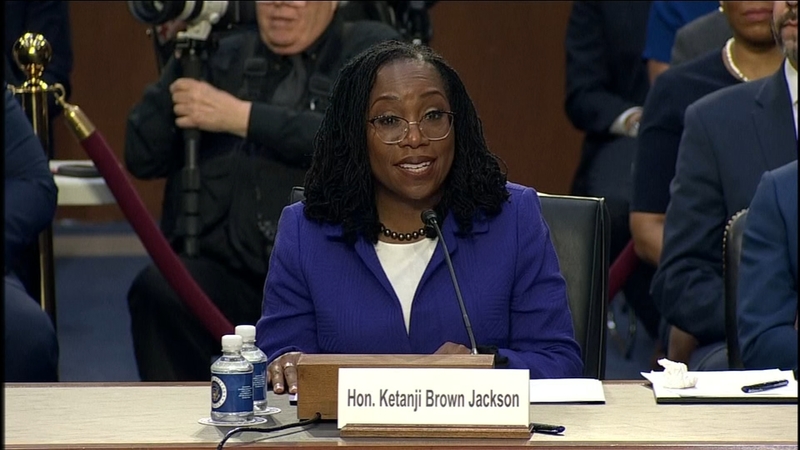 Many African-Americans are beaming with pride over this historic event, including students at Texas Southern University.

TSU students at the Thurgood Marshall School of Law watched the hearing in-between classes on Monday. The school was named after the lawyer and civil rights activist who served as the Associate Justice of the United States Supreme Court and became the court's first African-American justice.

ABC13 spoke to students who said they had always hoped this would happen in their lifetime. They say watching it happen, some feel as though they are on this journey with Jackson.

"Seeing a Black woman finally make it up there in all of her Blackness. Her hair and her locks, I love it," said Naomi Howze who watched the Senate confirmation hearings Monday as she prepares for graduation from TSU's Thurgood Marshall School of Law in just a few weeks.

"It does feel like getting picked last for kickball or something," says Howze. "There's been, like, 115 justices and this is the first Black woman that is actually been chosen."

Jayda Morgan is a first year law student at TSU who says, "For me, seeing the first Black woman that could possibly be confirmed to the Supreme Court and something that I think has been in my dreams. So to see somebody else doing incredible for me, truly."

Morgan says it's a dream she wants for herself someday.

"Seeing just the general reaction to her being confirmed has also made me want it for her more. Just the resistance that she has to face from people who think that she is not qualified when she's over qualified," said Morgan.

"We've been talking about it for years. Just getting more representation in the media and politics. I think it's a perfect way to show that everything's possible," said Kelly Ibekwe, a fellow student.

Students say seeing the possibility of a Black woman having a seat at the bench, which has historically been held by white men, and whose political ideas and looks align with theirs is encouraging for their own futures.

"I think this shows that the glass ceiling for women and for Black women in particular is coming down," says Jackson.

"This is such an exciting time not just for judges, not just for African-American women, but for the country as a whole," said Gilmore.

She served on the federal bench in the Southern District of Texas during the Clinton administration and retired in January 2022.

"I was fortunate to have both one of our U.S. senators, which was Kay Bailey Hutchison at the time, and one of our congressmen sit with me at the table during my confirmation hearing before the Senate Judiciary Committee. Which is a big plus to have a senator and a congressman sit with you," said Gilmore.

Gilmore is headed to Washington D.C. and will be in the room to watch Jackson in person as she faces questions from the committee's 11 Republicans and 11 Democrats over two days starting Tuesday.

"Senator Cruz's chief of staff called me and told me that they had a seat for me in the hearing," said Gilmore.

Gilmore says the possibility of a Black woman sitting on the U.S. Supreme Court is long overdue, but this now is an opportunity for the country to see the highest court in the land reflect what America really looks like.

"It is an especially exciting time for those of us, particularly African-American women who've been in the judiciary to see one of our own, be elevated to the highest court in the land. Somebody who is immensely qualified. Somebody who has the background experience, the education and the temperament to serve as a Supreme Court judge," says Gilmore.

Gilmore says Jackson's role on the Supreme Court will have a tremendous impact especially in the Black community. By encouraging and supporting dreams many women only hoped for.

"They will see her place there as meaning that it is achievable, it is attainable and it is something that they can certainly set their sights on. We'll be able to point to her as evidence and prove that Black women are qualified and deserve to be in the spaces that they are in. We are sometimes always having to push back and prove we deserve to be here. We're qualified, we're educated, we have the experience, but seeing somebody like her rise to the top lifts all of us in many ways," said Gilmore.
Report a correction or typo
Related topics:
politicshoustonblack historyu.s. supreme court
Copyright © 2022 KTRK-TV. All Rights Reserved.
U.S. SUPREME COURT
Supreme Court sides with Sen. Ted Cruz in campaign finance case
Thousands participate in Houston pro-choice rally
Senate Democrats' effort to secure Roe v. Wade falls to filibuster
Texas isn't ready to support more parents and kids, advocates warn
TOP STORIES
Is Texas missing out? Oklahoma cashes in on booming marijuana market
Teen shot in gunbattle between 2 groups in west Harris County
Constellation Field has more than Cracker Jacks for fans to enjoy
Line for sold-out concert stretched across Houston's north side
Elections Administrator GOP on upcoming election result delays
Harris County DA demands Hidalgo stop 'daily public misstatements'
Woman claimed self-defense in deadly Clear Lake marina shooting
Show More
Houston shelters feeling impact of baby formula shortage
Here's how many inches of rain you could get over the next 7 days
Galveston woman Turns to Ted after flood insurance issues
Oklahoma legislature passes abortion ban, heads to governor
Prairie View's 'Freedom Park' will send anti-racist message
More TOP STORIES News