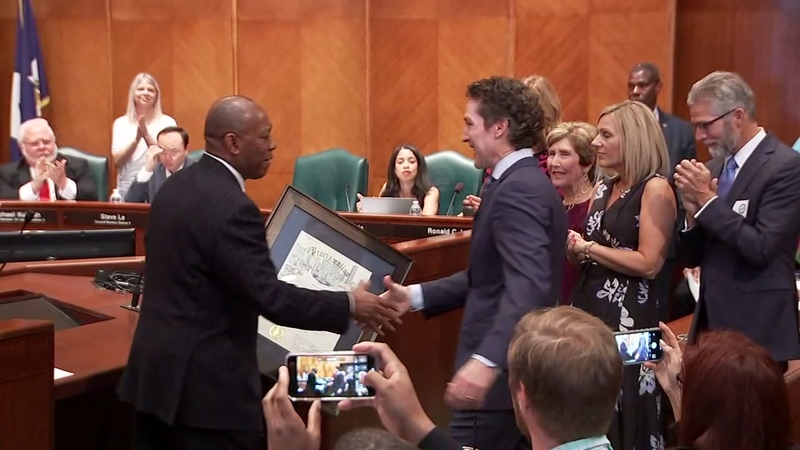 Joel Osteen honored by city of Houston for post-Harvey help

HOUSTON, Texas (KTRK) -- Pastor Joel Osteen, who initially took criticism for not opening the doors of his famed megachurch to those displaced in the wake of Hurricane Harvey, was recognized Tuesday by Houston Mayor Sylvester Turner and city council members for his role in storm relief.

Osteen, his family, and his Lakewood Church staff were honored at city hall.

According to the city, Lakewood helped thousands affected by Harvey's flooding get back on their feet, including assisting in rehabbing flood-damaged homes.

Turner presented a proclamation to Osteen in recognition of the church's efforts in the aftermath of the storm. Any council member can request a proclamation, which in this case was initiated by Councilman Jack Christie.

In the early stages of the storm's wake, many residents wondered why Lakewood Church was inaccessible to those seeking relief.

On the first of several heavy rain days, the church cited severe flooding for the cause. But, people quickly took to social media questioning whether the building next to Southwest Freeway was really impacted by the storm.

The day after, Osteen was prepared to help those in need.

"We have never closed our doors. We will continue to be a distribution center for those in need. We are prepared to house people once shelters reach capacity. Lakewood will be a value to the community in the aftermath of this storm in helping our fellow citizens rebuild their lives," the church said in a statement.

The church also released photos showing the flooding around the church.

The church eventually opened its doors, providing shelter, food and other essentials to anyone seeking it.

Lakewood Church in Houston has opened its doors to Hurricane Harvey evacuees following a weekend of criticism.

During an interview with Good Morning America, Osteen defended his decision not to open earlier.

"I think somebody created that narrative that somehow we were high and dry," he said. "None of that is true. This building was a safety issue and we took people in from the very beginning."

"When somebody's not in this situation, where, we have nobody in this facility. We were fearing that it would flood. The last thing we would do was put people in it right at the beginning," he added.

In the same interview, Osteen committed to helping the area recover, saying the church is in it for the long haul.