Investigation continues into cause behind Boeing 767 crash in Chambers Co. 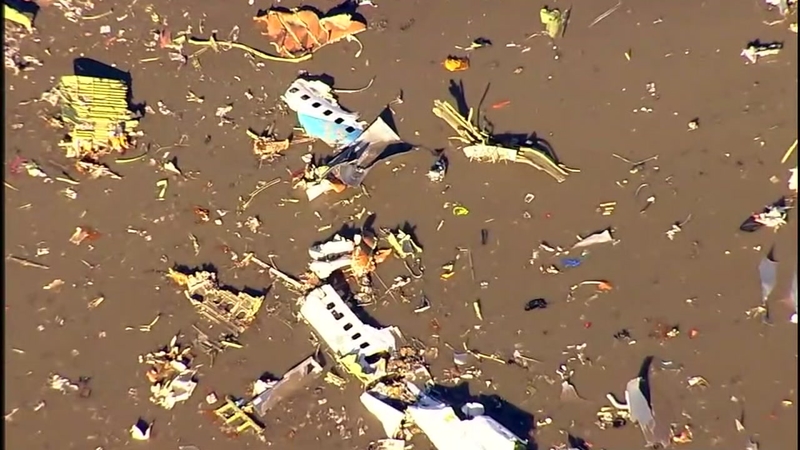 Investigators search for cause behind cargo jet crash

ANAHUAC, Texas (KTRK) -- Finding the black boxes, flight data recorder and cockpit voice recorder is a top priority for investigators. It's key in solving the mystery of Atlas Air Flight 3591.

"It is a mystery and the NTSB has 52 years of solving mysteries such as this," said Robert Sumwalt, Chairman of the NTSB. "I'm confident we will be able to get to the bottom of this."

Just how did the Boeing 767 cargo flight from Miami to Houston go down so quickly with no distress call?

On Sunday, the NTSB surveyed the wreckage area with helicopters and airboats. Both wings have been found, along with pieces of landing gear.

Investigators will analyze video captured from the Chambers County Jail cameras, which is 1.4 miles from the impact area.

"As it's descending, it's descending at a step descent. Steep nose down altitude and it is in the video for approximately five seconds," said Sumwalt.

"We are still in active recovery mode," Sheriff Brian Hawthorne said. "As I said yesterday, it's difficult to believe you could have any survivors, so at this point, it is recovery, but very important that we do recover it."

Mesa Airlines confirms one victim was a pilot with them since 2013. The company released this statement:

Mesa Airlines is saddened to confirm that a Mesa employee was onboard Atlas Air flight 3591, which crashed near Houston yesterday.

Captain Sean Archuleta had been a pilot for Mesa Airlines since 2013. He was riding in the jump seat of the aircraft.

"This is a sad day for the entire Mesa Family as we mourn the loss of Captain Sean Archuleta," said Jonathan Ornstein, Chairman and chief executive officer of Mesa Airlines. "Our thoughts are with Sean's family, the families of the two Atlas Air pilots, and the whole Atlas Air organization. This is a loss for all of aviation."

Don Dalton came to the crash site and told reporters that Archuleta stayed with him at times during layovers in Houston.

"You know how God says he takes the good ones early? Good things that happened were just interjections to what's going on in his life to now," said Dalton about Archuleta, who was a new husband and father. "They were all earth-shattering wonderful things that occurred and he didn't deserve it."

The NTSB says they could be here for weeks recovering the data recorders.

"It will be a painstaking process. We will have to use a combination of divers, scuba divers, or literally putting on waders and going out and walking through the debris field and feeling for them," said Sumwalt. "The debris will be loaded onto a barge, brought to a dock, cleaned, then taken to the Chambers County Airport hangar for a detailed examination.

The FBI and Chambers County Sheriff asks any local residents who have videos, pictures or possible debris in their yard to please call 1-800-CALL-FBI.