Dressing an MVP: James Harden's stylist on his star style 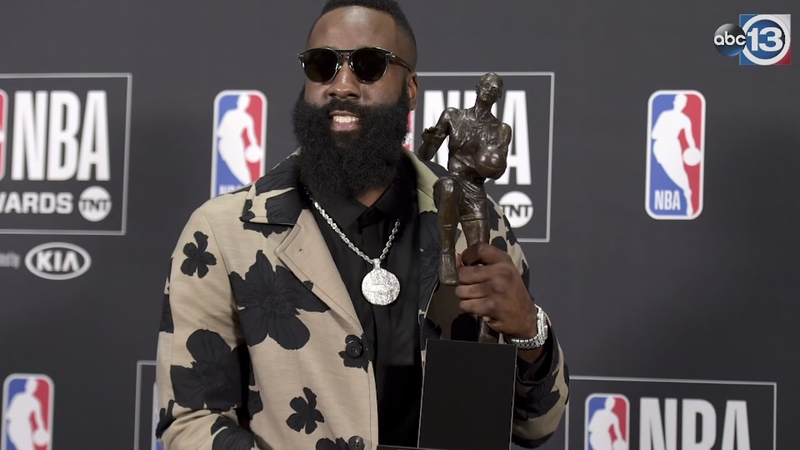 HOUSTON, Texas (KTRK) -- What's it like to jet-set to the fashion capitals of the world, dressed to the nines with Houston Rockets stars James Harden and PJ Tucker?

Just ask the woman who dresses one of them: Kesha McLeod. McLeod has been Harden's stylist for exactly one year, and she says she loves how her professional relationship with the newly-crowned MVP has grown.

"He's very expressive in what he wears. I don't want to say he loves everything. He definitely knows what he wants and that kind of keeps me on my toes. That's one of the reasons I like working with him," McLeod explains. "He's good at also building a relationship with brands and questioning why he should wear something."

McLeod says she and Harden had known each other for a while before she became his stylist. The shift to connecting with each other on fashion came when Harden decided he wanted to take his brand more seriously.

"I won't call it a fairly easy job of working with him because it's definitely a lot of being in his face and fittings, which he doesn't like. Our fittings are probably 20 minutes," McLeod laughs.

Harden's style has emerged as one to watch, not just on the streets, but right before a game in the tunnel leading to the locker room.

From silk shirts and matching print sets, to Balenciaga sneakers and Valentino sweatsuits, Harden has let his pre-game attire do the talking.

Harden hasn't been flexing his tailor-made muscles alone before he hits the court. Tucker, a Rockets small forward, has been strutting right alongside him.

Last season, the duo often walked through the tunnels looking like they'd leaped off the pages of Vogue or GQ, with even the NBA taking notice.

"It's kind of something we've never seen before. Two really big guys just walking in together and complementing each other," McLeod said.

But that tight-knit relationship outside of basketball is no mistake. McLeod says it developed even more when Harden suggested Tucker join them in Italy for Milan Men's Fashion Week earlier this month.

"I just kind of looked in awe, and it's really good how in sync they are and how different they are in fashion. They like two totally different things when I thought they were kind of the same," McLeod tells ABC13. "We would be at lunch and they would be side by side. To see how they play off each other, PJ is older and you can see how he takes that older brother role with James."

Until Milan, McLeod says that she hadn't interacted with Tucker much except for seeing him in passing at games in Houston.

Once they made it to Italy, she saw just how much knowledge he had about the fashion world. That's something that might not come as a surprise to fans who follow Tucker.

He's known for his extensive shoe collection, which include various Air Jordan styles and versions of the Nike Air Max. His collection is so coveted, even Michael Jordan asked where Tucker got a rare pair of Jordans.

In fact, when it comes to styling, McLeod says Tucker doesn't need much help at all.

"You have to see the collections he has and he's just knowledgeable as well. He just knows those things. Just to have something you're really in love with, which is basketball, the first love to know so much like that, so that kind of surprised me and how he lays out his looks is really cool," McLeod said.

"It was just really refreshing to see and I've never seen anyone like that in my 12 years of styling," McLeod added of Tucker.

When the look comes together at the last minute

Harden took home his first NBA Most Valuable Player award Monday night in California, but the win was hardly what stood out most for some people.

Harden rocked a bold print from British designer Neil Barrett, who he'd been working with for months before the awards show.

"It was always intended to get a look for the NBA Awards (in Milan) whether he was getting MVP or not. I kind of knew he was a shoo-in for it," McLeod said.

The initial look the designer sent Harden for the awards, a navy blue suit, didn't quite fit his style.

Barrett invited Harden to see his collection in Milan.

"We go to the show and there's this beautiful, bold pattern. It's tan with big, bold black flowers. And it came in shorts. The overcoat was always there, not necessarily a longer suit jacket," McLeod said.

Instead of shorts, Barrett created the pants Harden wore.

The suit itself is not even available yet, as it premieres in Barrett's collection next March.

McLeod says they worked on Harden's ensemble up to the very last minute, with the outfit being delivered from Milan to Los Angeles in just two days.

Some fans were uncertain what exactly the print was supposed to be, with some of them panning the style.

"I've learned with dressing my clients not everything is going to please everyone," McLeod said. "I think its great for guys to come out the norm and not wear a typical navy blue suit or a typical black suit or even a pinstripe suit."

Meanwhile, Tucker sported a red Dior suit with a double-breasted jacket he spotted in Paris.

Even if you don't always agree with what Harden and Tucker are wearing, their Instagram pages might be ones to watch for their style choices over the coming months.

McLeod says they have plenty of looks planned through September, October and November.

"(Harden) is a little bit different from what someone else would wear. It's definitely been a journey. I gave him the biggest hug, I was like, I can't wait to leave you!" McLeod laughs. "That was our last day and it was June 13 and we started this journey of being in Milan and we've kind of just been traveling ever since."