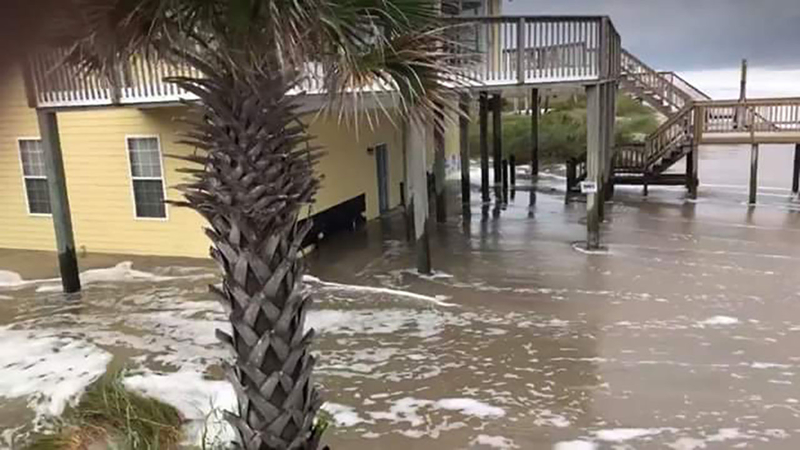 Governor Roy Cooper said in a press release Tuesday that two more deaths have been confirmed as a result of Hurricane Florence, making the death toll 39 in North Carolina.

The latest fatalities include a 47-year-old man found dead outside a Duplin County home on Sept. 21 due to a head injury sustained when he fell from a ladder while repairing storm damage and a 69-year-old man in Pender County who died on Sept. 22 after falling from a roof while cleaning storm debris and repairing damage.

"Florence cut a broad path of death and destruction through our state and we will not soon forget this storm or the lives it claimed," Gov. Cooper said. "For people working to recover, applying with FEMA is the single most important thing you can do. If you suffered damage from Florence, make sure you apply for assistance right away."

While the death toll in North Carolina stands at 39, other deaths occurred in South Carolina and Virginia.

In South Carolina, two detainees drowned when a van was swept away in rising floodwaters.

Authorities in Virginia said one person was dead after an apparent tornado, the first fatality attributed to Florence not in the Carolinas.

During the storm, the body of a 1-year-old was found in Union County. His mother had escaped her car with him after the vehicle was washed away by floodwaters, but then she lost her grip and the boy was swept away, authorities said.

In South Carolina, officials are investigating after a man drove into standing water on Pond Branch Road near Gilbert and died.

A husband and wife who died in a Fayetteville house fire are also counted among the dead from Florence.

Two deaths were previously reported in Duplin County. The Duplin County Sheriff's Office did not say exactly how the pair died; however, they said their deaths were related to flash flooding and swift water on roadways.
In Wilmington, a 41-year-old woman and her 8-month-old baby were killed after a tree fell on their home after Hurricane Florence made landfall in the Carolinas. Police identified the woman as Lesha Patrice Johnson.

The father, Adam Zachary Johnson, 48, was transported to a hospital for treatment.

Lenoir County officials said a 68-year-old man was electrocuted at a home when he attempted to connect two extension cords outside in the rain. His body was discovered by family members.

In Kinston, a 77-year-old man was found dead Friday at his home on Middle Street. It is believed his death was caused when he was blown down by the wind when he went out to check on his hunting dogs.
In Wayne County, an 81-year-old man died when he fell and struck his head while packing to evacuate Friday.