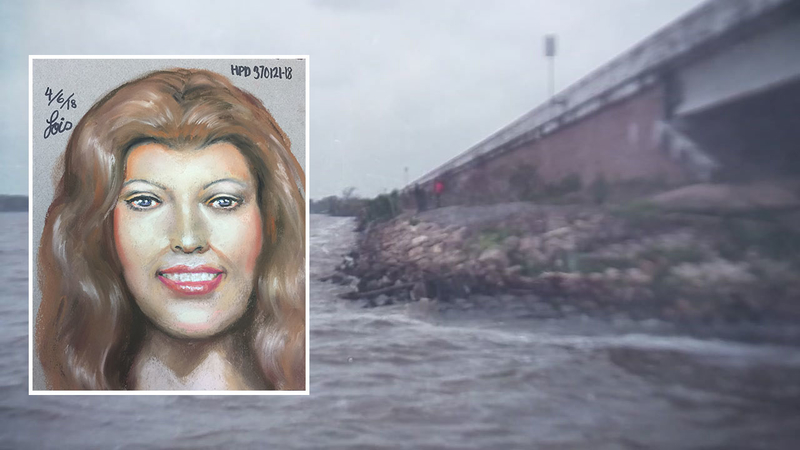 HOUSTON, Texas (KTRK) -- Houston police are trying to track down a man they think may be linked to a severed human head found in a bag near Lake Houston in March.

Volunteers discovered the human remains while cleaning up trash and debris along the bridge in the 11000 block of FM 1960 East on March 24.

"They found it right down there a human head," recalled Eryka Young.

Houston police released a sketch of the victim Friday afternoon.

"When (a volunteer) picked up the bag, the bag was heavy," said Roger Randall, a volunteer who helped with the Lake Houston event. "When she picked it up, she could see the human hair."

DO YOU KNOW THIS WOMAN? Sketch released in severed head case

Police are now trying to find anyone with information on the identity of a man seen in the area about two weeks before the head was found. He is described as being in his early to mid-20s with short dark brown hair and long bangs that went across his face. He is about 5 feet 4 inches to 5 feet 8 inches tall with light skin, and he was wearing a gray and black plaid shirt.

"There were small holes in the bag and hair was visible when they looked into those small holes they could make out the profile of the head," said Andrew Barr, a homicide detective with HPD.

Police say the man was driving a teal or blue-green Chevrolet Silverado extended cab pickup truck. The back left passenger window was broken and had what appeared to be cardboard over the window. The truck is described as having lots of rust and looking as if it had been wrecked several times.

Witnesses told police the man got out of the truck from the front passenger side and then threw a black plastic bag off the bridge.

Investigators told Eyewitness News that they believe someone threw the trash bag over the bridge, aiming for the water, and missed.

Police say the victim appeared to be a white or Hispanic female between the ages of 20 and 45 years old.

"We're putting our victim between 25 and 50, white female with dark wavy hair...naturally wavy hair, but the hair was dyed red at the time," said Barr.

Detectives with the Houston Police Department are looking into missing persons cases in Harris, Montgomery and Liberty counties. Officials are also working with Cameron Parish Sheriff's Office in Louisiana after a woman's head was also discovered in a trash bag south of Hackberry on the shoulder of Highway 27.