How to escape a flooded car: Putting rescue device tools to the test 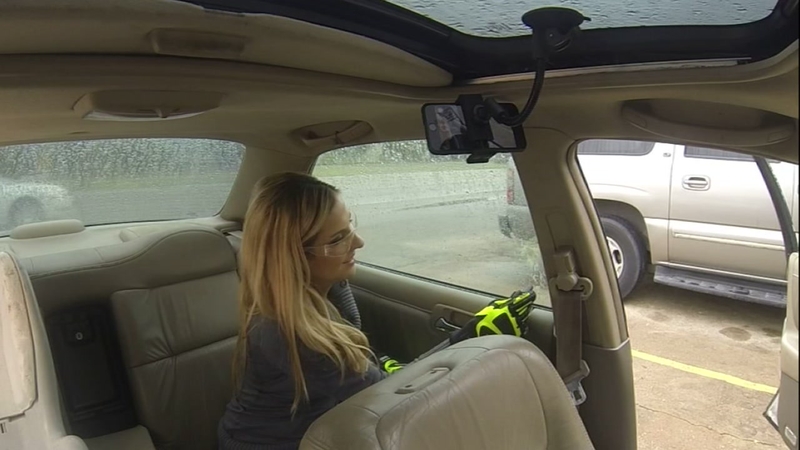 How to escape a flooded car

HOUSTON, Texas (KTRK) -- Imagine your car is going under water. It's a terrifying scenario we have seen too often around Houston's flooded streets and waterways.

Crash escape tools and hammers promise to help you break out of your car if you were suddenly submerged, but do they really work? Sergeant Eddy Godwin from the Houston Police Department Dive team helped us test escape tools on a donated car from Houston Junk Car Buyer to see which ones could get the job done.

Tools promise to help you escape to safety

"The number one thing is just to get out of the car as fast as possible," Sgt. Eddy Godwin said.

If you are faced with rising water, you should try to escape as quickly as possible by opening the door or the window. If water is already over door level, however, you will not be able to open the door because of the pressure from the water.

The escape tools are designed to help you shatter a side window, but during our test, we quickly found out that not all of these devices are created equal.

The Crash Safe Device was able to break the window in just two strikes. It has a tiny pin hidden in a cigarette lighter plug and also comes equipped with a flashlight and red emergency beacon light to draw attention.

The more conventional hammer tools we tested proved more difficult to use, and less reliable.

We tested two hammer-shaped tools with tips that were made of a softer metal like aluminum. Even after repeatedly hammering the side window with these tools, the glass remained undamaged. Sgt. Godwin explained that you need a hammer with a steel tip in order to break the window. We found the Resqhammer sold online on Amazon. Its tip is made of stainless steel, and the device comes with knuckle protecting for breaking windows.

With the steel-tipped device in our test, Sergeant Godwin could shatter the window in just three blows. But with the same tool, I hammered for over a minute, and got nowhere.

It was the smallest device we tested that worked the best. Just like the Crash Safe Device, the ResQMe keychain uses a spring loaded pin. It only took one punch for the window to crumble.

"That's why these spring punches are good, because it doesn't take a lot of force. All it takes is you pushing, and not necessarily swinging and breaking," Sgt. Godwin explained.

Window tint can also influence how easy it is to break the window.

"If you have tint, that's even harder because it's a film that goes over the window," Sgt. Godwin said.

In our test on tinted windows, the tools could shatter the glass, but the glass remained intact because of the protective film. We had to use extra force to push the entire window out.

Where you hit the window can also make a difference. You'll want to aim for the corners, the weakest point on the window.

Location also matters when it comes to where you store your escape device.

"Center console, maybe in your door, somewhere where if you do get into an accident, it won't go flying," Sgt. Godwin explained.

The ResQMe keychain that worked best in our test is conveniently attached to a keychain, ensuring that it is within reach, if your keys are in your ignition.

If you are shopping for a device, make sure you look for one that also comes equipped with a razor. If your seat belt locks up, you can use it to cut yourself or your child out of the car.

Even if you're equipped with the best tool, you'll never want to forget this number-one life-saving tip.

"If you see water over the curb, turn around. Don't drive into it, because you don't know how deep it is," Sgt. Godwin said.
Report a correction or typo
Related topics:
automotivefloodingrescuecar
Copyright © 2022 KTRK-TV. All Rights Reserved.
TOP STORIES
Murder-suicide gunman forced daughter under water in tub, records show
$25K reward offered to find 14-year-old's 'vicious killer'
CDC advisory panel greenlights booster shots for children ages 5 to 11
Rainfall projections continue to increase for next week
Fertitta Family College of Medicine named after $50M donation to UH
Here are the top 14 things to do in Houston this weekend
New 53-mile stretch of Grand Parkway opens in both directions
Show More
Teens accused of stealing car Katy mom used to comfort son with autism
NY high court to determine if Bronx Zoo elephant is a person
House passes terrorism bill after shooting in Buffalo, New York
What is monkeypox? What to know after US confirms 1st 2022 case
Ford recalls SUVs due to engine fire risk
More TOP STORIES News