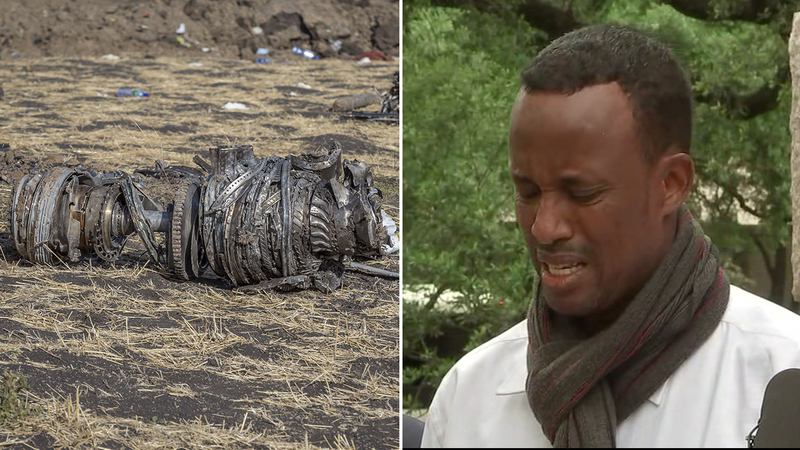 HOUSTON, Texas (KTRK) -- With flight cancellations extending into the summer involving the Boeing 737 MAX in the U.S., families of victims who died in two high-profile crashes involving the model are taking aim at the aircraft-maker.

Houston attorney Nomi Husain is representing a lawsuit on behalf of an Ethiopian Airlines passenger who died in the March 10 crash shortly after it took off.

In a news conference Monday, Husain called out Boeing for putting profits over safety when the company maintained the model was safe to fly, despite one other crash that happened before, the Lion Air incident last October in Indonesia.

In the Ethiopian crash, preliminary findings showed faulty sensor readings erroneously triggered the anti-stall system that pushed the plane's nose down. Pilots of each plane struggled in vain to regain control.

"As more evidence has come to light, Boeing has been forced to admit through its CEO, as recently as last week, that they know that (its software) contributed not only to the Ethiopian crash, but also to the Lion Air crash," Husain said. "And the Boeing CEO has apologized. He said, 'I'm sorry.' But, you know what, 'I'm sorry' is not going to bring back 346 people who were killed (in both crashes) as a result of Boeing's greed."

Husain was flanked at the news conference by Hassan Abdi, the brother of Mucaad Abdalla, who was killed in the Ethiopian crash. Abdalla was 29 years old and newly married at the time of his death.

"He was in the prime of his life and was ripped away from his family due to the negligence and greed of Boeing Corporation," Husain said.

A tearful Abdi said, "I cannot believe something like this can happen, the way the airplane crashed...I wish (my brother) was alive."

"These tragedies continue to weigh heavily on our hearts and minds," Muilenburg said in a statement Thursday. "The full details of what happened in the two accidents will be issued by the government authorities in the final reports, but, with the release of the preliminary report of the Ethiopian Airlines Flight 302 accident investigation, it's apparent that in both flights the Maneuvering Characteristics Augmentation System, known as MCAS, activated in response to erroneous angle of attack information."

On Monday, more families of Lion Air victims joined lawsuits against Boeing. Husain said there is one other lawsuit against the company based on the Ethiopian crash.

Husain added they are leaving the dollar amount of damages to the jury.