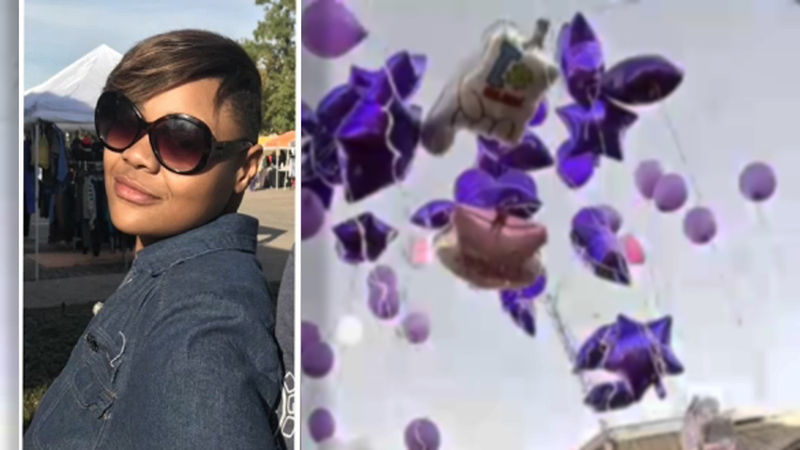 Vigil held in honor of fiancee killed days after proposal

HOUSTON, Texas (KTRK) -- A 39-year-old parolee accused of killing his fiancée four days after he proposed to her remains in jail.

Kendrick Akins is requesting protective custody because of threats he claims to be receiving on Facebook.

An attorney speaking on Akins behalf told a magistrate on Sunday that he believes relatives of his deceased fiancée are also inmates at the Harris County jail, and said "they were going to get him as soon as he hits the floor."

Akins is charged with fatally shooting Dominic Jefferson during an argument outside a west Houston apartment early Saturday morning.

According to the probable cause affidavit, Jefferson yelled 'shoot me' as the fight escalated.

Moments later, she was shot in the chest.

Akins is also charged with firing a shot at a witness who tried to intervene. A magistrate set bond on both charges at $250,000.

Dominic and Kendrick got engaged just before midnight on New Year's Eve. The proposal was recorded on Facebook Live. Jefferson's mother watched it. "I thought she had finally found the man of her dreams," she said. "It was the nightmare of her life."

The couple had met only three months before, according to friends. "I thought it was fast," said UT Quan, one of Jefferson's friends, who witnessed the proposal. "I said, if they're happy, I'm happy, but when the altercation happened, I was thrown off. I was like, how could you do that? You just proposed," he said.

Akins, according to the court, was on parole until March for an earlier conviction. The state opposed bond today, citing an extensive criminal history, both locally and on out of state charges. He was employed in Houston as a construction worker.

Hunter said neither she nor her daughter researched Akins background, which also included a charge of assault on a family member in the past.

"This needs to wake women up to do their research on who they're letting into their lives," she said.