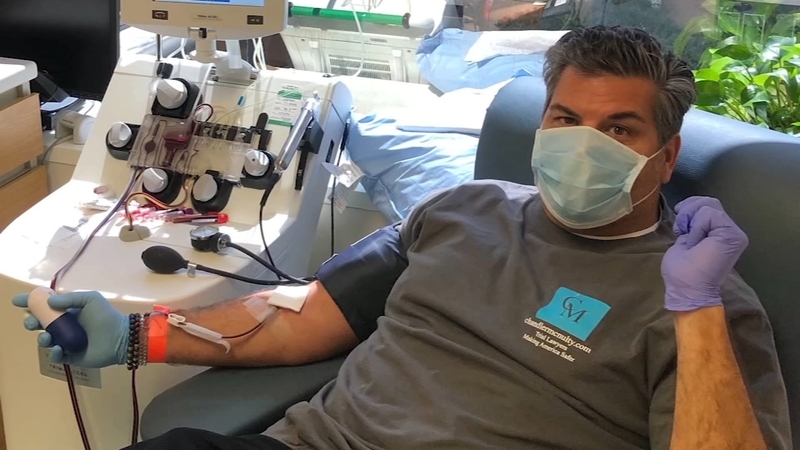 HOUSTON, Texas (KTRK) -- As more people are recovering from COVID-19, they could help others who are still sick by donating their blood plasma. Their antibodies could help another patient.

A month ago, Troy Chandler was sick, really sick.

"There were a couple of nights where I thought this is it," said Chandler.

The husband and father of three has had the flu, this was worse.

"There were two nights when literally I was praying to the big man. Just take care of everybody if this was going to be it," said Chandler.

He got tested for COVID-19 and it came back positive.

Now, weeks later, he's better. He learned he could help others recover by donating his blood plasma.

"To donate what we call convalescent plasma, which is a fancy word for giving the liquid part of blood that has the good antibodies that we're looking for to treat patients, someone would have to have had a positive test for COVID-19 virus. They probably would have been a little ill or a lot ill, depends on the individual, and then they would have recovered," Dr. James Musser, Chair of the Department of Pathology and Genomic Medicine at the Houston Methodist Hospital and Research Institute.

Dr. Musser said once recovered, if you're not showing symptoms for two weeks, you could be a candidate to donate.

"Then they are interviewed after arriving here because we have to go through a formal sort of questionnaire that determines whether they have any underlying medical reasons that would stop them from donating," said Dr. Musser.

The first day he could help, Chandler was there.

"I've donated twice. I have my next appointment tomorrow," said Chandler.

Doctor Musser says this is an experimental therapy.

"We're very cautiously optimistic about use of this therapy but it remains very experimental and we just need more time and more patients to be treated," said Dr. Musser.

Chandler says he'll keep donating as long as he can.

"My wife and I have three boys and when it's that bad and you're contemplating not being around for the three boys, who the heck wouldn't help if they could? I'm just grateful for the opportunity," said Chandler.