Houston mayor on reopenings: Texas 'about to repeat its mistake' 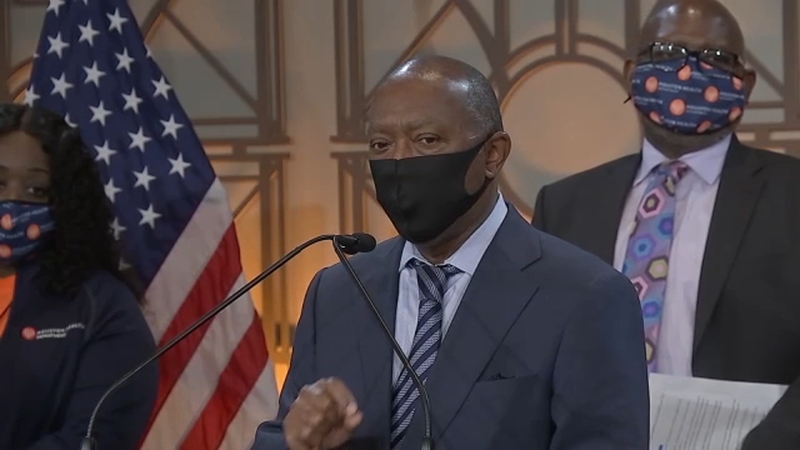 Houston mayor says city in no position to reopen

But the one thing that the leaders might not see eye to eye on: reopenings.

On Thursday, a day after Turner urged caution specifically about potential reopenings, the mayor sent a more detailed message directly to Abbott and the state, offering a reminder of the last time similar actions took place.

"We must remain vigilant and not reverse the hard work we have done to reduce COVID-19 positive cases and deaths. In March and April, cities and counties worked together with the media to slow the coronavirus progression. We were successful, and our numbers were better than those of most major cities around the country. Because the number of positive cases and deaths were low, the Governor commenced reopening businesses without consulting with local governments. In addition, he took away the authority from cities and counties to manage the response. The results were disastrous.

"Thirty days later, the virus was out of control like a forest fire, and more people tested positive, more people died, and hospitals were scrambling to expand capacity. Consequently, the State ordered businesses to close for a second time, and Texas joined Florida, Arizona, and California in the national spotlight but not in the right way. In July, the Governor imposed a statewide mask requirement which was desperately needed, and he should be commended for that.

"And again, cities and counties and local media rallied together with the State to slow the virus's spread. This helped significantly reduce the positivity rate, which needs to be below 5% and stay there. Most of the numbers are better, but the number of people dying is still too high, and the positivity rate remains above 5%.

"And now that numbers are better like in April, the Governor is about to embark on the same course again. It is frustrating that he is making decisions that impact all of us without including local officials in the process. The State is about to repeat its mistake, expecting a different result. Please tell that to the virus and explain that to the people who will suffer."

Earlier this week, Abbott hinted at reopenings, promising to talk about it next week after Labor Day.

"I said last month that Texas wouldn't have anymore lockdowns - despite demands from mayors & county judges insisting on lockdowns. Since my last orders in July, [COVID-19] numbers have declined - most important hospitalizations," Abbott tweeted.

Since my last orders in July, Covid numbers have declined—most importantly hospitalizations.

I hope to provide updates next week about next steps. https://t.co/EmmankcMMO

The governor has repeatedly said his actions on reopening will be based on the current numbers, once before reopening when cases were steady.

"This is not our moment for people to think that we have reached our goals because we have not," Turner said after touting Houston's positivity rate fell about 20 percentage points down to 7.8%. "The numbers and the many indicators are better, but we have not reached our goal where we need to be. And so, when we start talking about opening up, let me be on a cautionary note, we need to be very, very careful."

Also on Wednesday, Texas' positivity rate fell below 10% after it was nearly 25% about a month ago, which mirrors Houston's trend.

Still, Turner wants to see that key indicator fall below 5% and "stay there." The remarks came as the city crossed the 64,000-case mark. There are now 841 deaths attributed to the virus. And as has been the case during the course of the pandemic, the Houston area remains the Texas metropolitan with the most cases.

The mayor recognizes the vigilant strides made getting close to the 5% goal, but he offered what he saw as a disheartening observation inside city hall.

"I had a conversation with my staff just the other day, saying, 'Mayor, it seems...that people have just tuned out,'" he shared.

Aside from delivering his assessment on reopening, Turner spent time during his COVID-19 briefing Wednesday to introduce a phased antibody testing survey, which is being conducted through a partnership between Houston Public Health, Rice University, Baylor College of Medicine, and the CDC.

The antibody testing will determine if someone has had a *past* infection, but not detect a *current* infection. That is why it is still important to get tested.

Our goal with the antibody testing is to better understand this disease in order to mitigate its spread.

Having as much information as possible about the prevalence of exposure to the virus will help in making decisions about public health measures, which is why we need the community’s support.

The mayor said phase one will take place beginning Sept. 8 and ending Sept. 24. Phase two will start in the early part of 2021.