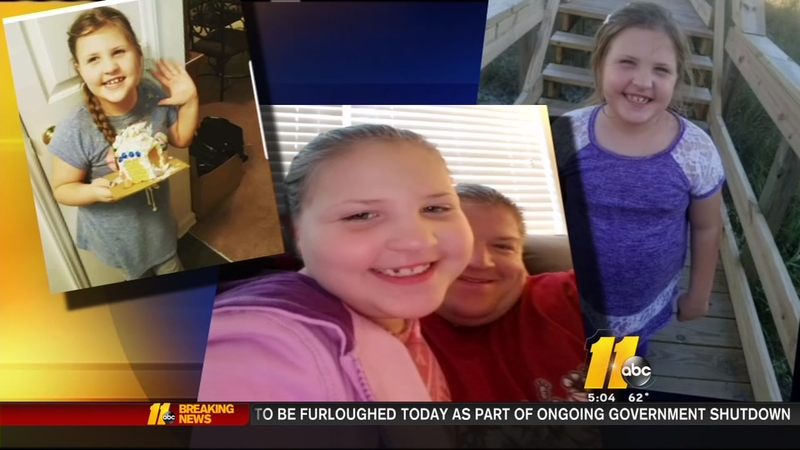 Cary girl, 6, dies just days after getting the flu

CARY, NC -- A 6-year-old Cary girl diagnosed with the flu on Tuesday died Friday night after being rushed by ambulance from her home to a hospital in Raleigh.

The sudden death of Emily Muth left her parents and her 8- and 10-year-old brothers shocked and heartbroken.

"Devastated. How could that even happen? I mean one day she's fine, you know, and I mean she had the fever and she was a little achy," her mother Rhonda Muth told our sister station ABC11. "Other than that, I mean, she had had the runny nose and cough like typical, you know, and then she's gone. It's horrible. I don't wish this on anybody."

The girl's father, Nathan Muth, said, "The flu is no joke right now. It's a plague in America."
RELATED: 8 ways to flu-proof your home
The parents said that when Emily first got sick Tuesday, they took her to an urgent care in Cary.

A flu test came back positive.

Her mom was given a prescription for Tamiflu and was told to keep her hydrated.

By Thursday her fever was still up and down, but much closer to normal than two days earlier.

But on Friday her breathing was labored and at midday her mother called an ambulance.

She says the paramedic told her the labored breathing was a typical symptom of the flu and that he thought her daughter would be OK.

"He asked us you know, 'We can take her.' And, you know, they're the medical personnel. I trust what they know. And they said she was fine." Rhonda Muth said.

"She was breathing a little bit heavier. And all of sudden she just raised up and went back down. I went, 'Emily, Emily.' And I noticed she wasn't breathing," her mother said at her Cary home.

Paramedics showed up quickly and took over CPR, but by the time they got to WakeMed it was too late.

'COULD MORE HAVE BEEN DONE?'

"Could more have been done?" Her father asked.

Nathan Muth then added, "You know you always think that. You know what I mean? If they had said, 'Get to the hospital.' What could have been done? The ambulance that was called that Friday morning, they saw her state."

Muth and his wife said, however, they are not bitter. But they are getting flu shots for their two boys - something Emily didn't have.

And they simply want other parents to be aware and do the same.

"So many stories online of people that flu-tested positive and kids are passing away two, three days later, 17-year olds, 5-year olds, 10-year olds, but you never think it's going to hit home," Nathan Muth said.

Through tears, her mother said, "She was a good girl. Everybody loved her.

A GoFundMe page has been set up to help the family with funeral and other expenses. You can donate here: https://www.gofundme.com/profile/rhonda-schamburamuth-qm3wn
Report a correction or typo
Related topics:
health & fitnesscarywake countyfluchild deathflu seasonwake county news
Copyright © 2021 WTVD-TV. All Rights Reserved.
More Videos
From CNN Newsource affiliates
TOP STORIES