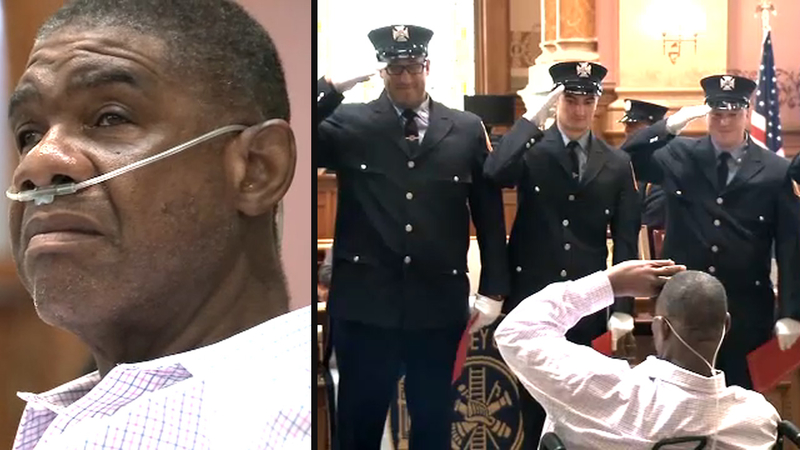 JERSEY CITY, New Jersey -- A New Jersey man who was saved from a house fire when he was 10 years old and then spent 55 years visiting the firehouse almost daily was honored by the Jersey City Fire Department Friday.

Gregory Green was rescued by firefighters from Engine 20, Ladder 5, and then spent more than five decades helping with chores and held conversations with on-duty firefighters.

"He had a scanner," Captain Stephen Drenna said. "At the smell of smoke in the neighborhood, he'd be out there 3, 4 o'clock in the morning, filling bottles, giving us coffee, doing all of the that."

After the 65-year-old suffered a series of health setbacks, firefighters now visit him regularly at his rehab center to return the favor.

Green recently battled cancer, lost his mother and is dealing with crippling health problems, but on Friday, he was made an honorary Deputy Chief of the department at the annual Jersey City Fire Department Awards Ceremony.

"I'm blessed," he said. "To me, it was like being home away from home...It made me real proud, and that's why I'm crying now. That's why I'm tearing now."

Green, also known as GG and G-man, soaked in plenty of love and appreciation, from a standing ovation to salutes from the award winners.

"They took him in and they nurtured him and loved him," sister Theresa Brown said. "And because of that, he knew that he was loved there. They became his second family."

Firefighters are undoubtedly a brotherhood, and Green is a bedrock part of this family.

"He's one of my most favorite people in the world, and I say that sincerely," Drenna said. "I've had conversations with Gregory. His heart, his spirit, his soul is just incredible, beyond what he does for the fire department. The type of person he is is incredible."