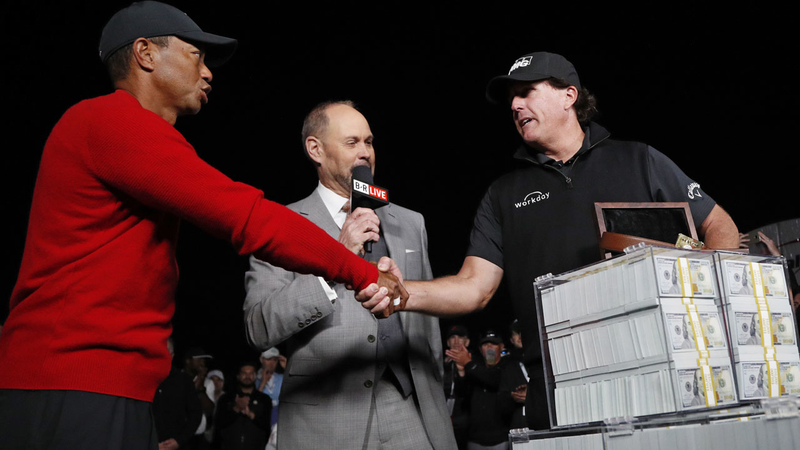 Mickelson beats out Woods in overtime

LAS VEGAS, Nevada -- Phil Mickelson beat Tiger Woods in overtime Friday in their $9 million pay-per-view match in Las Vegas that ended up free for many viewers because of technical problems.

Mickelson won on the 22nd hole, making a 4-foot birdie putt on a specially set up 93-yard, par 3. The match at Shadow Creek Golf Club finished under floodlights.

"Just know I will never let you live that down," Mickelson told Woods after the match. "It's not the Masters or the U.S. Open, but it is nice to have a little something on you."

Woods said he enjoyed the match, even if he was on the losing end.

"You couldn't have made this event any better than it was," Woods said. "It was back and forth and very competitive on a golf course that was playing on the tricky side."

The match made for some compelling golf at times, if only most people would have been able to see it. Technical difficulties marred the event, which was billed as golf's first pay-per-view broadcast.

Some viewers were unable to view it on their televisions after paying $19.95. Turner and Bleacher Report representatives sent out links on social media allowing people to view it for free on their computers and mobile devices.

"We experienced some technical issues on B/R Live that temporarily impacted user access to The Match. We've taken a number of steps to resolve the matter, with our main priority being the delivery of content to those that have purchased the PPV event," Turner spokeswoman Tareia Williams said in an emailed statement.