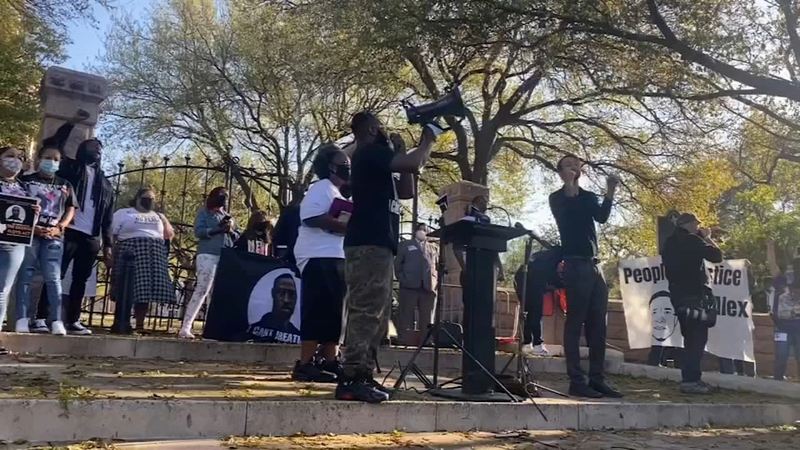 AUSTIN, Texas (KTRK) -- A sweeping police reform proposal that would require law enforcement officers to intervene, or render aid if another officer is using excessive force while on the job, was discussed in a hearing Thursday at a Texas legislative committee meeting.

A statewide version of the George Floyd Act for police reform will be discussed this morning in Austin, but supporters gathered ahead of the hearing.

The Texas George Floyd Act, spearheaded by members of the Texas Legislative Black Caucus, is named after the Houston native who was killed in Minneapolis police custody. Floyd, a Black man, died after a white police officer knelt on his neck for several minutes until and after he lost consciousness.

A close friend of Floyd spoke before the house committee. They were both so close, he considered Floyd a brother.

James Dixon with the Houston NAACP was also at the hearing supporting the bill.

"It has the potential of making our streets safer - especially for the citizens of color," said Dixon.

The bill requires a written policy concerning the use of force, with an emphasis on de-escalation and states that the use of deadly force must be a last resort. It requires officers to render aid in a medical emergency. It also removes an officer's defense of qualified immunity in a lawsuit. Qualified immunity protects officers from being personally liable for constitutional violations.

But the president of the Houston Police Officers Union Douglas Griffith says the legislation is not necessary.

"A lot of the things in the George Floyd Act can be handled through training and policy, that's the sad part. We don't really need to legislate things. We need to have better policies, better training," said Griffith.

Plus, Griffith said HPD already has a number of the policies in place that are in the bill, including the use of force policy.

"I think our policy that we have currently works very, very well with the George Floyd Act, and again, it's all in how we get there. At the end of the day, we want to be more professional," said Griffith.

Floyd's death last May set off protests across the country and renewed debate over police brutality and racial inequity. It also sparked new calls for policing and criminal justice reforms - including proposals that have failed at the Texas Capitol in recent years, often after opposition from police unions.

The bill would also address qualified immunity, which shields government officials from litigation, by allowing civil lawsuits at the state level "for deprivation of rights under color of law," according to a caucus summary of the legislation. Another provision would end arrests for fine-only offenses like theft under $100, a version of which died dramatically in 2019 after union opposition.