ABC13's Game of the Week: East Bernard at Boling Sept. 14 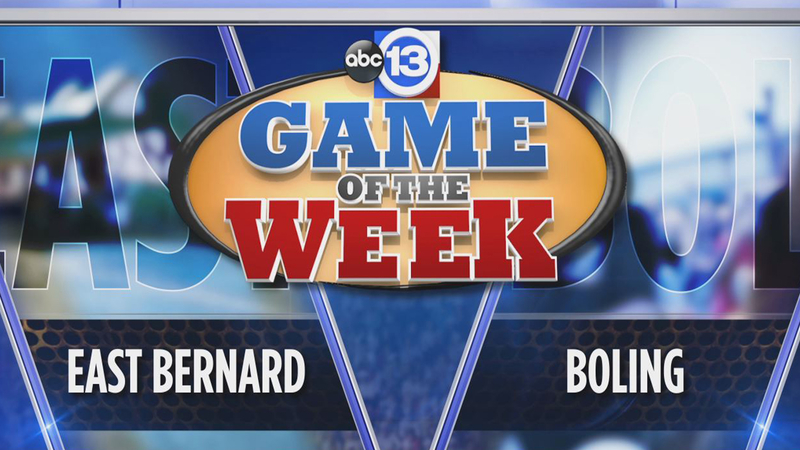 Week three of ABC13's Game of the Week takes us to Boling for the Wharton County rivalry between the East Bernard Brahmas and the Boling Bulldogs.

Here's some information about the two teams:

East Bernard is riding high after starting the season undefeated. The Brahmas started the season by shutting out Rice Consolidated, 16-0.

But last week, the Hitchcock Bulldogs gave East Bernard a scare towards the end of the fourth quarter. After a touchdown put Hitchcock within a point with three minutes left, East Bernard would stop Hitchcock short on the 2-point conversion to hold on for the 19-18 win.

Meanwhile, the Boling Bulldogs seek their first win of the season after two close losses. Boling lost to the Van Vleck Leopards in Week 1 after Van Vleck running back and Houston commit De'Mitri Monroe ran for 225 yards and two touchdowns. Then last week, a late touchdown by Hallettsville dropped Boling to 0-2 on the season.

Last season Boling fell to East Bernard in a district matchup, only to exact revenge on their rivals a few weeks later in the playoffs.

The last time Boling won a state championship was back in 1972. One of the assistant coaches from the school's team that season had some sound advice for this year's squad, especially as they get ready to play after days of rain across the region.

"When you play on a wet field, it kind of equalizes both teams because you don't really know what's going to happen and when it's gonna happen. And not to worry about making mistakes because the thing that you always have to know is the most important play in football is the next play," former assistant coach Bob Pyssen said.

A Boling coach from the 70s has some sound advice for the team ahead of their game Friday.

East Bernard's coach Wade Bosse, who has been there for 11 years, says that despite the rivalry, the two teams are a lot closer than you might think.

"Our kids are looking forward to playing Boling as I'm sure they are to playing us. We're so close by. We have families that are connected. We have friends that are connected. That's what makes it a rivalry," Bosse explains. "We're always excited about playing Friday nights in East Bernard. Our community supports as well and we're looking forward to every Friday night challenge."

East Bernard's coach talks about how the community supports the team.