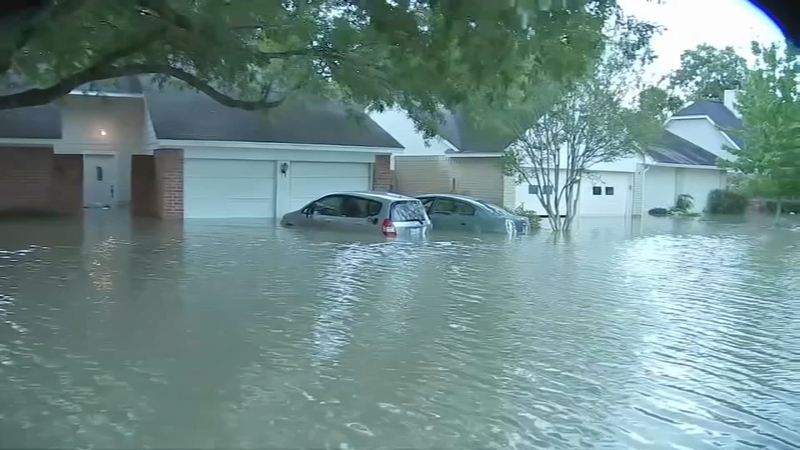 HOUSTON, Texas -- There were several drainage projects throughout Pearland and Friendswood that broke ground or finished up in 2021, and there will be more in 2022.

Both cities will take on projects this year that are designed to help mitigate flooding issues, but there is also a different aspect Pearland and Friendswood officials said they look to include: incorporating recreational and green spaces with these projects when possible.

"It all ties together," Epperson said. "It's not jurisdictional, either. Clear Creek is our border between us and Harris County, and so it's multijurisdictional."

Pearland will work on several drainage projects throughout the year, including smaller ones such as improvements to the Brookland Acres neighborhood, Garden Road and O'Day Road. For drainage projects incorporating recreational spaces, the city is preparing to expand the Hickory Slough Sportsplex-which also acts as a detention pond-in 2023 and 2024, and it plans to begin construction on a new portion of the Clear Creek Trail in 2022.

Similarly, Friendswood has a few dual-purpose projects planned, including the Forest Bend Park detention basin the city expects to begin construction on in the first half of 2022 as well as the FM 1959 detention project, which does not yet have a definitive timeline, Friendswood Director of Engineering Jildardo Arias said.

"These types of projects will primarily be used for flood control," he said. "The addition of recreational amenities are done on a case-by-case basis and depend on the availability of funds."

Friendswood will work on one project in 2022 that incorporates improving recreation in the city.

Friendswood's Forest Bend Park detention basin project along FM 528-or East Parkwood Drive-between Townes Road and Clear Creek will help with future flood-reduction projects within the city limits, Arias said. The project is still in its engineering phase, he added, but is expected to begin in the first six months of 2022 and take a year to complete.

Friendswood is working with a consultant to determine the viability of diverting water from other areas to Forest Bend, which once complete can help with other efforts such as a terracing project near the former public works facility on Deepwood Drive, where Clear Creek and Cowart Creek converge, Arias said.

"This mitigation must be in place before other types of flood-control projects may come online to mitigate any potential downstream impacts by those projects," Arias said.

The $3.1 million Forest Bend detention project is funded primarily by a Community Development Block Grant the city received from the Texas General Land Office, Arias said. As a part of the project, Friendswood will also improve, expand and add lighting to existing trails in Forest Bend Park, Arias added.

Meanwhile, early modeling for Friendswood's FM 1959, or Dixie Farm Road, detention basin project shows the area between Lott Avenue and Clear Creek, which includes a neighborhood, could see as much as a quarter of a foot decrease in flood level, Arias said.

Like with the Forest Bend project, a significant benefit to the project is that it is needed to set up future flood-control projects, he added.

Friendswood and Harris County Flood Control District bonds as well as American Rescue Plan funding are all sources that have been considered for the proposed project; however, Harris County Commissioners Court could also potentially commit funds for the project, Arias said. The project could cost up to $38 million, he said.

For projects that incorporate recreational and green spaces in Pearland, the city is working on two projects that will not be completed within 2022, but the process for them is already underway.

The Hickory Slough Sportsplex itself features a 153-acre detention pond that also serves as six soccer fields when they are not filled with stormwater, which is a dual purpose Pearland values, Epperson said.

The John Hargrove Environmental Complex located on Magnolia Parkway is an example of the dual-purpose use Pearland seeks with some of its projects. The 85-acre land includes the Delores Fenwick Nature Center, a recycling center, wastewater treatment plant and 2 miles of trails around two large detention ponds, said Cullen Ondracek, natural resources manager for Pearland's Parks and Recreation Department.

The city of Pearland, through the Pearland Economic Development Corp., has also collaborated on the Clear Creek Trail project with different organizations.

Pearland is mainly focusing on the recreational aspect along Clear Creek within its boundaries, mainly creating a 21-mile trail that will eventually stretch from FM 521-or Almeda Road-on the west side of town to Dixie Farm Road on the east.

On the drainage side, the U.S. Army Corps of Engineers allocated $295 million for drainage improvements in the Clear Creek Watershed in 2018, which includes HCFCD's Clear Creek Federal Project near Pearland.

"Once completed, the Clear Creek trail will be a signature recreational amenity," PEDC President Matt Buchanan said in an email.

Pearland's vision for the complete trail along Clear Creek is for it to include tie-ins to some of the regional parks close to the city and even to those in Harris County, such as Tom Bass Regional Park, Adair Park, El Franco Lee Park and even further up north to Houston with Sims Bayou, Epperson said. There is no timeline for when the entire Clear Creek Trail project will be completed, Buchanan said.

However, six miles of the trail in Pearland have already been finished, and the city plans to start construction on another portion of the trail stretching from Hughes Road to the University of Houston-Clear Lake at Pearland campus in 2022, Epperson said. Construction will cost $7.3 million, but the city is talking with the Texas Department of Transportation to split the project into two, which could reduce the total budget for construction to $3.4 million, said Skipper Jones, Pearland assistant director of capital projects.

With the Hickory Slough Sportsplex and John Hargrove Environmental Complex locations serving as examples of what using dual-purpose uses out of drainage projects looks like, the benefits for Pearland and Friendswood go beyond reducing flood risk in the community, Ondracek said.

"I'm definitely a big supporter of when you do these sites (of) being able to have multiple uses out of them," Ondracek said. "(Collecting) stormwater, you got the recreational aspect of it for people and then of course providing space for nature and wildlife still within the city."