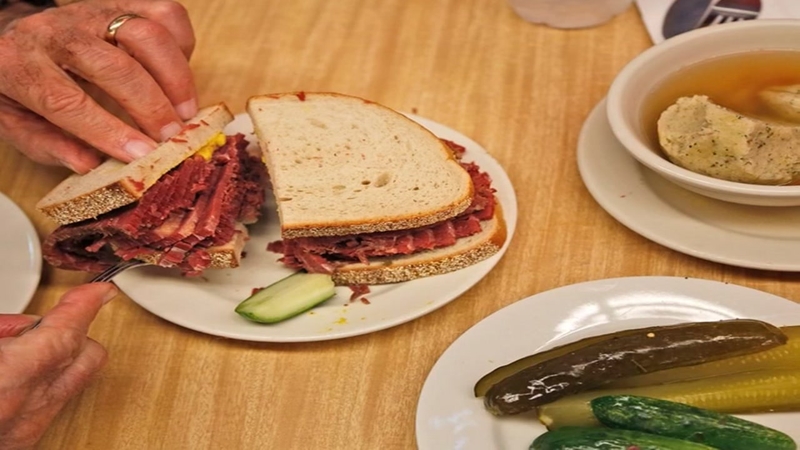 EMBED <>More Videos
NEW YORK -- Katz's Delicatessen has been urging customers to "send a salami to your boy in the Army" for generations. Now, the New York City restaurant, where everyone's favorite scene from "When Harry Met Sally" was shot, is expanding its shipping capacity so it can send perishable delicacies like pastrami and corned beef around the globe.

The plan to offer a taste of authentic, old New York by mail is part of an ongoing effort by Katz's young owner to modernize a business that hasn't changed much since it was founded on Manhattan's Lower East Side in 1888.

"I can't necessarily replicate the entire experience for you, wherever you are at home," said Jake Dell, 29. "But I can give you the food. I can bring it a little bit closer to you."

A granddaddy of New York City's vanishing Jewish delis, Katz's has become a draw in recent years for tourists looking for bits of the old, immigrant experience in a gentrifying neighborhood where gleaming condo towers are replacing old tenements.

And unlike some New York City eateries packed with tourists, it is as popular with foodies as it is with the masses of out-of-towners.

Visitors and locals filled the 300-seat restaurant Thursday, polishing off 6-inch (15.24-centimeter) high sandwiches under the gaze of the celebrities whose photos line the walls. Waiters threaded their way through the packed dining room amid the clatter of tables being cleared. A sign hanging from the ceiling indicated the spot where Meg Ryan was sitting when she acted out a fake orgasm in the 1989 film about Harry and Sally.

Dell represents the third generation of his family to run Katz's. He celebrated his bar mitzvah there. And as owner, he's balancing tradition with some gentle changes.

A new 30,000 square-foot (2,787.07 square meters) shipping facility in Hackensack, New Jersey, will open sometime in the next year. Katz's is also opening a takeout-only outpost in Brooklyn's new DeKalb Market Hall next month. Katz's, lucky to own its building in a city where rent increases have a habit of putting even iconic spots out of business, also recently gave itself a financial cushion by selling off adjoining properties and air rights to a condominium developer.

"We're looking at ways of connecting to people that want this food," Dell said. "There's really no limit to the amount of pastramis I can send to people."

Katz's began encouraging customers to "Send a Salami to Your Boy in the Army" during World War II and the business still ships salami overseas. But cured meats that require refrigeration are shipped only within the United States. A triple classic sandwich combo includes a pound each of sliced brisket, pastrami and corned beef, a loaf of rye bread, 1 pound of mustard and 2 quarts of pickles.

Dell isn't sure exactly when the expanded delivery service will start or which countries he'll market to first.

"Canada seems to be the easiest first step," he said. "South America has a strong passion for cured meats. The UK and Australia have been clawing out to us and just craving this food. But it's difficult and navigating those customs waters has been an eye-opening experience. I hope to get there soon."