Cameron Maybin's stolen base wins free Taco Bell for everyone 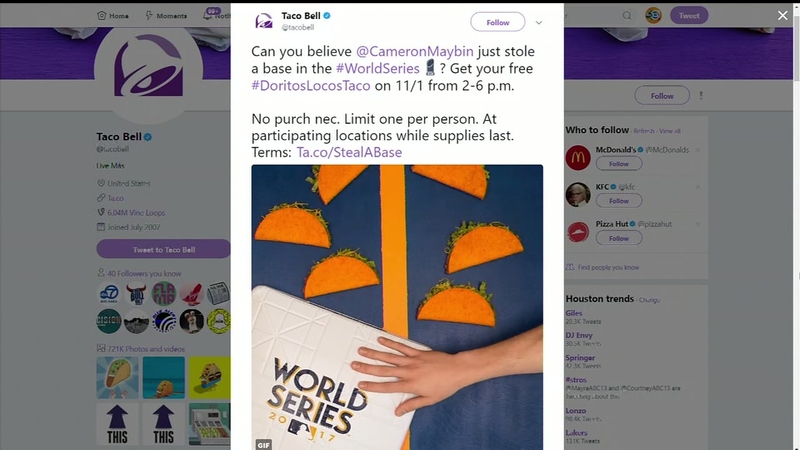 Astros' stolen base means free Taco Bell for everyone

LOS ANGELES, California (KTRK) -- Game 2 of the World Series had a huge stolen base with a big reward attached to it.

Houston Astros' reserve outfielder Cameron Maybin got his hands safely on second base in the 11th inning of the epic game.

The first stolen base of the World Series means free Doritos Locos tacos at U.S. Taco Bell restaurants today. Hungry diners can pick up their free taco at participating restaurants from 2 p.m. to 6 p.m.

One free taco will be awarded per person per location. You can view more details on Taco Bell's website.

The fast-food restaurant has been running the promotion for the past 10 World Series. Maybin's golden stolen base is the sixth time that the country won free tacos.

The distinction is not lost on Maybin, who was a late season waiver wire acquisition from Anaheim.

What's better than a win in extra innings? Free @tacobell! Proud to be America's #StealABaseStealATaco guy. You ALL get free tacos on 11/1! pic.twitter.com/sRdpp1Z7Js

In a tweet, Maybin added that his kids were more pumped for the free Taco Bell than the Game 2 win.